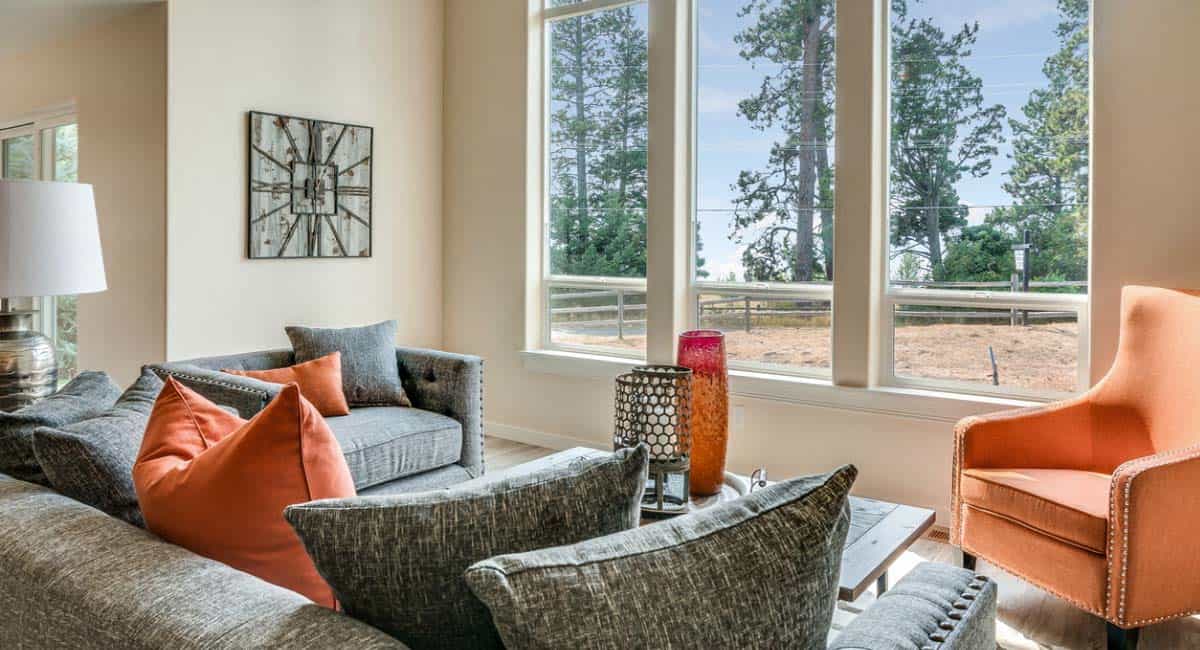 Elegance, simplicity, and serenity—these are the first things that come to mind when I think of the color beige.

Beige is a dependable color that goes well with nearly every theme and decorating style imaginable, from modern to traditional.

It might not be eye-catching, but it’s versatile and forgiving; perfect for when you’re unsure of what to put on your walls.

In this article, I’ve listed my favorite warm beige paint colors for living rooms from some of the world’s top paint brands, from Sherwin Williams to Benjamin Moore.

I’ve also shared some tips on how to use them.

How Does Warm Beige Paint Feel in a Room?

With undertones of brown and a tiny bit of yellow, warm beige paint evokes feelings of warmth, comfort, and calm.

These qualities come out the most when used with warm off-whites and gentle neutrals.

The best kind of living room to use this color?

It works brilliantly in sunny, south-facing living rooms, but it also works great in darker spaces when paired with deeper, darker shades from the neutral color family.

Here are some of my favorite warm beige paint colors that breathe new life into a living room:

Inspired by the delicate color of traditional French Macaroons, Benjamin Moore French Macaroon is a beautiful pale beige color that fades well in the background but leaves an impression.

It’s a warm-undertone pink that changes with the living room light.

It’s soft, light, and airy, so it works well with nearly every living room regardless of style, theme, or furniture.

Boutique Beige is a great option for smaller-sized rooms thanks to its high LRV of 63.2%.

When pairing, you can choose grays, deep blues, greens, and wooden furniture.

As for accents, I recommend either stark white or a darker shade of beige or brown, like the Dunn-Edwards New Cork.

Behr Aged Beige is a warm beige color with faint gray undertones. Depending on the time of day or light source, it may appear greige.

This color looks its best when used with walnut wooden tones and textures, as well as striking white accents, trims, and finishes.

It has an LRV of 63, so it works well with both small and mid-sized living rooms.

Behr Penthouse View is a beige that can read as a warm gray with just a slight pinch of magenta.

When daylight falls, it can appear almost lilac.

It also has faint traces of yellow, which you can bring out with earthy palettes of browns and greens.

This color can be used as a base or a paint color for furniture pieces and accents.

Wheat Bread doesn’t come off as overly warm, and because it doesn’t have gray undertones, it never reads as cool.

It works with practically every living room theme, from contemporary to rustic.

When paired with plush furnishings and creamy colors, for example, it’ll transform your living room into a bohemian-inspired retreat.

It has an LRV of 58, so it falls on the mid to the lighter end of the color scale.

As such, it’s best used in mid to larger-sized living rooms for full authenticity.

As it’s neither too warm nor too cold, Accessible Beige works astonishingly well in north or south-facing living rooms.

It’s light enough to brighten a room but dark enough to not clash with white trimming.

Since it’s a true-neutral color, it works well with almost every living room theme, from traditional to transitional, to country and farmhouse.

With deep orange and yellow undertones, it heavily leans towards the warmer end of the color spectrum.

When paired with equally warm colors, such as sage brown, mustard yellow, and rich red, Kilim Beige will transform your living room into an intimate and cozy space.

For this reason, I recommend using this color in north-facing rooms.

When used in north- and south-facing rooms, the pink becomes a bit more prominent.

In east- and west-facing rooms, the orange shines through a bit more.

Stone House goes wonderfully well with wooden tones in cabinets, flooring, and small furniture, as well as brick and stone.

Not to be confused with Stone House, Benjamin Moore Stone Hearth is a transitional color of warm beige to taupe.

This is one of BM’s most acclaimed beige colors.

For a more luxurious feel, add black or charcoal to your living room’s color scheme and watch it transform.

For this reason, it mixes well with today’s modern decor.

With an LRV of 49.8%, it’s right in the middle of the color scale. It can be used in both mid- and larger-sized living rooms as a base or accent.

For small rooms, it’s preferably used as an accent.

Mimicking the dusty-brown color of the desert, Sherwin Williams Nomadic Desert is an unforgettable shade of beige that demands to be seen.

With an LRV of 50, Nomadic Desert adds a decent visual weight to a room.

This makes it suitable for larger rooms and mid-sized rooms that feel a bit bare-boned.

It looks especially striking when contrasted with white trimming and creamy/pastel colors.

As the name suggests, Sherwin Williams Balanced Beige is neither too warm nor too cold—it’s a perfect balance between the two!

With an LRV of 46, it’s a smidge darker than Nomadic Desert.

It’s a medium to dark-toned paint that can make your living room feel bold, authentic, and characteristic.

Balanced Beige looks its best in north-facing and south-facing walls.

If you use it in east and west-facing rooms, it can appear a bit too warm.

Valspar Shaker Beige is a warm beige with brown undertones.

It’s characteristic and bold, especially when used with creamy colors.

However, it really shines when paired with other earthy colors such as forest green, dusty rose, cool blue, and mustard yellow.

Since it’s on the darker end of the color scale, it works best as a base in large-sized rooms with high ceilings and an accent in mid- to smaller-sized rooms.

It doesn’t entirely fade in the background but it doesn’t overwhelm the space with its color, either.

White trimmings and accents make this color pop out even more.

Feeling a bit bold? Sherwin Williams Universal Khaki might be right up your alley.

It has an LRV of 40, so it’s on the darker end of the scale. This means that it’s best used in larger-sized rooms, preferably with greater ceiling heights.

You can also use it in smaller rooms, but only as an accent or trim so as to not shrink it even further.

Universal Khaki has deep brown undertones, but when placed under natural daylight, you’ll detect shades of warm red underneath.

From my experience, this color works best in colder and northern regions due to its warming effect.

If used in warmer areas, pair it with cooler paint colors to counteract the warmth.

As a dark beige, Sherwin Williams Double Latte can potentially weigh a room down if not used properly.

Since it’s so dark, it’s recommended in larger living rooms rather than small to mid-sized rooms as it can make a space appear smaller than it actually is.

For smaller living rooms, it works better as an accent rather than a neutral or a base.

There you have it, folks; my favorite warm beige paint colors for living rooms are from lightest to darkest!

Beiges with an LRV of above 55 work great with mid- to smaller-sized rooms, as they can brighten a space and make it look larger.

Darker colors with an LRV of less than 50 should only be used in larger-sized living rooms and accents so as to not weigh the space down and make it look too dark and congested.