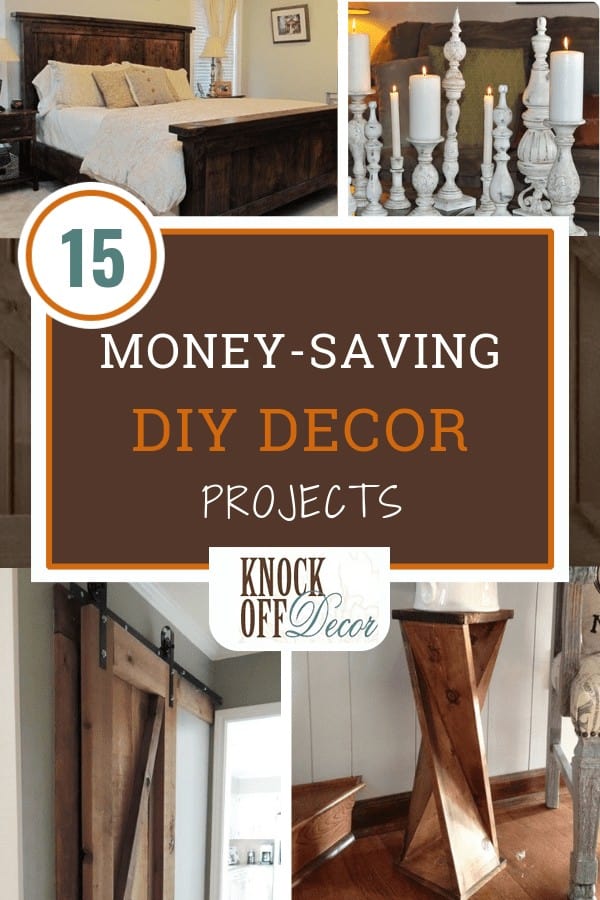 When it comes to saving money and home decor, it’s all about DIY. The instant you decide to “DIY and not buy” something you want for your home, you’re making your proverbial dollar go a lot farther.

Over the years, we’ve had some pretty good money-saving projects to share here. We thought we’d round a few of them up and list them out in all their thrifty and creative glory!

Ok, this first one isn’t a knockoff where you save some bucks doing it yourself, but it was just so fitting with the penny-pinching theme, we had to include it!

Benjamin Franklin once said, “A Penny Saved is a Penny Earned”.

How many of us have pennies sitting in a jar waiting to go to the bank?

Today they seem almost useless in our debit card society and that is why this project from Suzy at Real Happy Space will be so much fun to make. 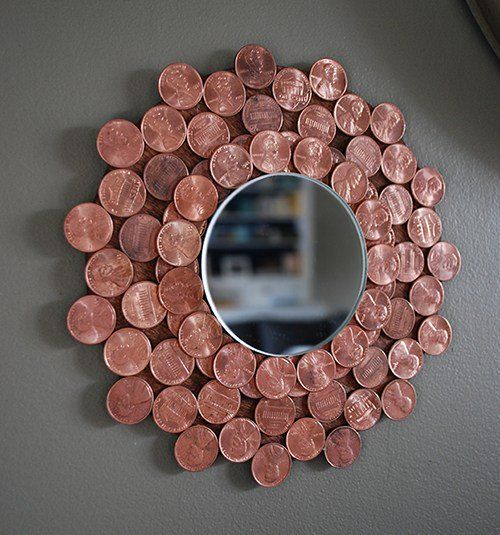 Chris and Julia of Chris Loves Julia “amped up” an unfinished six-drawer dresser from IKEA and turned it into the piece they’d been dreaming of for their in-progress nursery.

Julia says it was an easy makeover, involving the addition of couple of boards and a coat of mint paint.

Now the couple can sit back and enjoy the $3,000 they saved and pack their beautiful dresser full of tiny clothes! 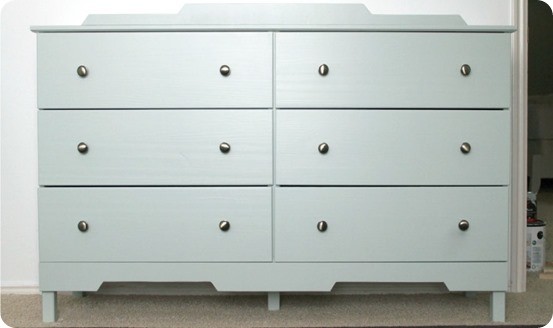 Corey from Tiny Sidekick wanted to create a blanket ladder like one she’d seen in the Pottery Barn catalog.

It wasn’t until she’d already made her own for $5 that Corey actually saw the whopping $179 price tag on her inspiration and realized just how much she’d saved.

And to top things off, Corey made her ladder in only 30 minutes.

If power tools aren’t your thing, you could even have the wood cut in the store. Then all you have to do is screw the pieces together. Easy peasy! 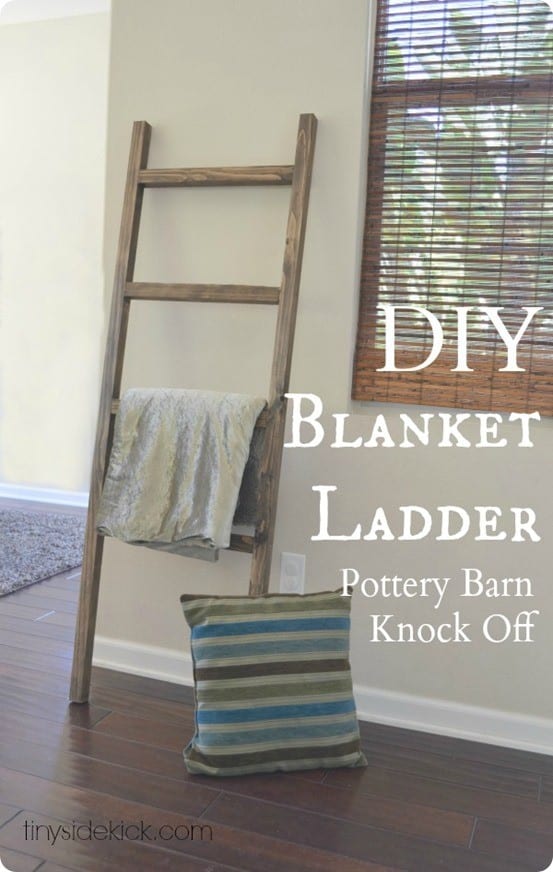 The couple over at DIYstinctly Made had dreams of a large bed that they could both stretch out in comfortably.

They kept coming back to Pottery Barn’s Farmhouse Bed, but the price tag was a whopping $1,600 for a king!

That’s where Ana White comes in!

She just so happened to have plans for the exact bed, allowing the couple to get the bed they wanted at the price they could afford.

Here’s what they have to say: “This bed cost us around $250 to build ourselves.

The end result is amazing and we love our new DIYstinctly Made bed. The best part is we can say we did it together!” 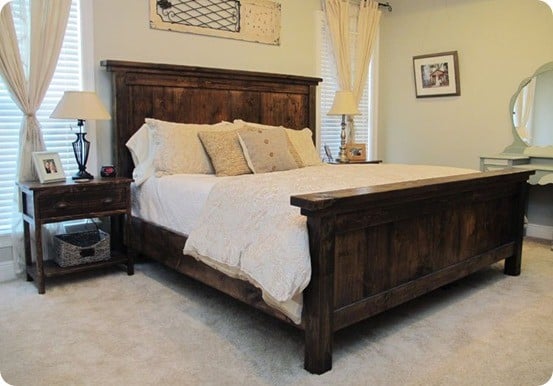 5. One Board Twisted Side Table for $6

This past fall, Shara of Chasing a Dream entered the One Board Challenge that was hosted by Jen from House of Wood.

Shara had to come up with a project to make from a single 1x8x8 board and knew she wanted it to be useful, creative, and unique.

She found a twisted wood table as inspiration and was able to replicate it for about $6.

Shara says, “I LOVE this little table and it is totally worth a few bucks and a couple hours in the shop!”

Julie of DO or DIY needed a creative solution for her laundry room after installing new appliances that blocked the door from opening all the way.

Julie and her husband realized a barn door was the perfect solution and would make quite the statement in their boring hallway.

The only problem was the price.

Instead of dishing out hundreds for a laundry room door, Julie and the hubs decided to build their own barn door using antique wood from an architectural salvage shop and simple materials found at any big box hardware store.

Julie says, “At the end of the day, it ended up being just under $65 and looks identical to many of the other options we found that ranged from $300 all the way up to nearly $1000!” 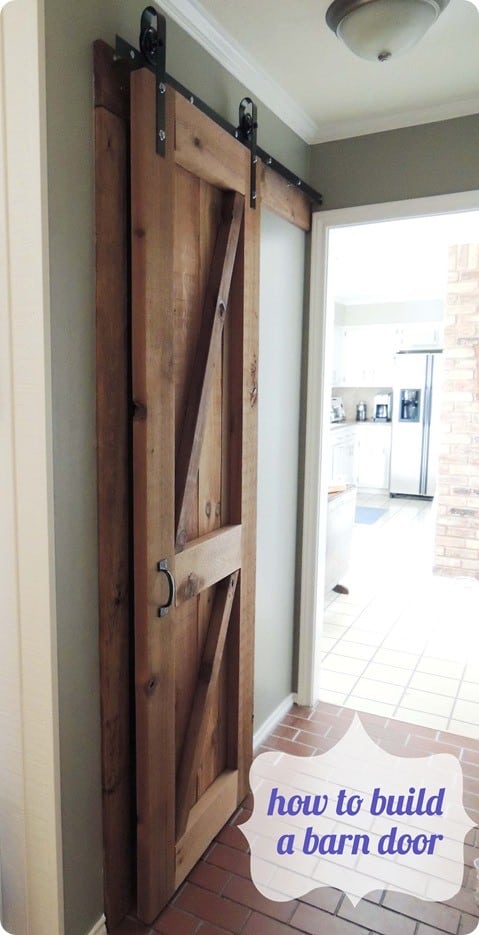 7. DIY Plant Stand ANYONE Can Build!

When Corey from Tiny Sidekick was coming up with a woodworking plan for these West Elm inspired plant stands, she wanted it to be a project anyone could do. Thus, this simple wood plant stand was born!

It’s perfect for adding style to your potted plants both indoors and out and giving them a little boost off the ground.

Corey says, “They don’t have the exact details of the inspiration but at less than $10 a stand compared to over $125 for the original I’ll take mine any day!” 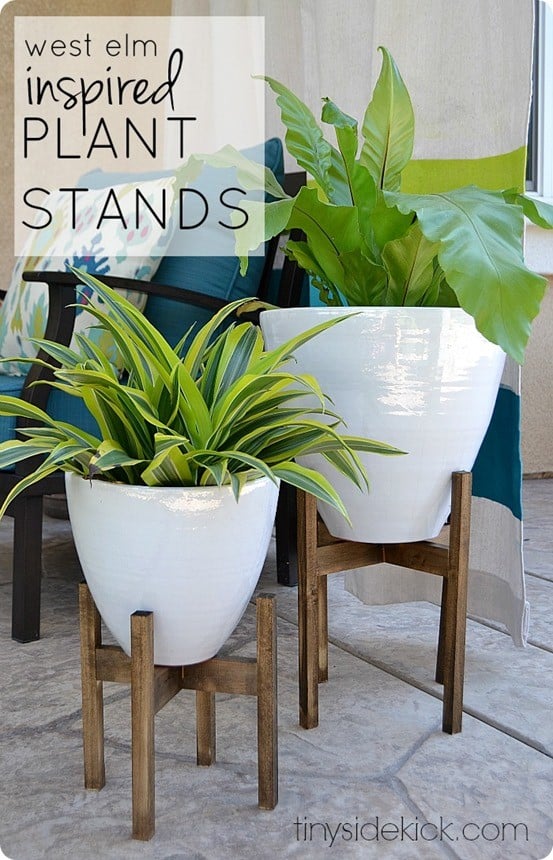 Decorate Me Diana turned to her wood stash and a few other basic do-it-yourselfer supplies to create a rustic clock face that rivals those from Pottery Barn.

For the numerals, Diana simply printed them from the computer and then used some good old fashion scissors and Mod Podge  to apply them to the clock face – no cutting machine or hand painting required! 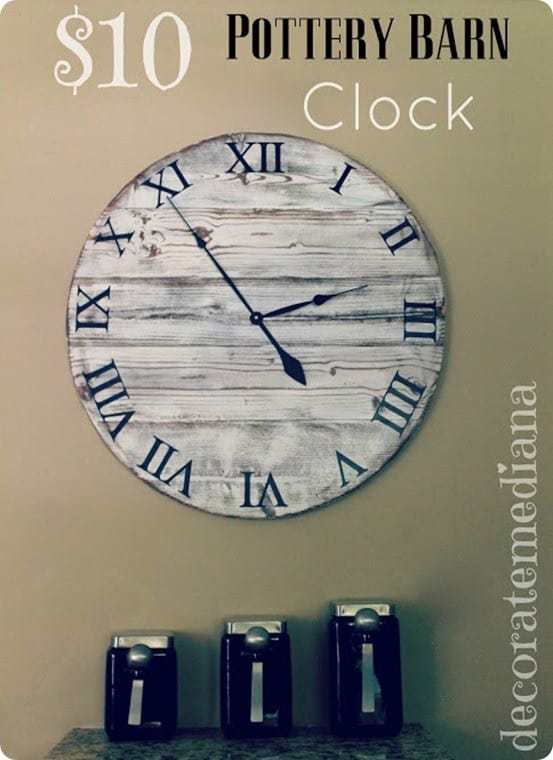 Slowly but surely, Amy from Delineate Your Dwelling has been making progress on her master bedroom update.

She has challenged herself to keep costs as low as possible, which meant spending $10 a knob for Faceted Orb Knobs from Anthropologie wasn’t happening.

Instead, Amy grabbed some air dry clay and easily sculpted her own gold knobs for less than a dollar a piece! 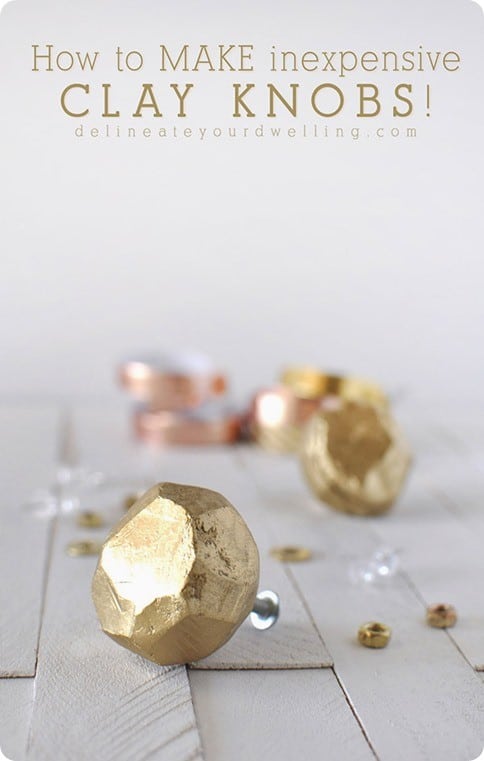 I mentioned months ago on Instagram that I was crushing on West Elm’s Emmerson Dining Table and trying to decide if it was a buy or DIY.

Cara from Build It Craft It Love It has long shared my love for this gorgeous reclaimed wood table but wasn’t about to drop a grand on it.

In true DIY fashion, Cara built her own for ridiculously less than West Elm’s price. Like only $120. I know… CRAZY!

Cara even shares how she achieved that gorgeous reclaimed pallet wood finish without even using pallets. 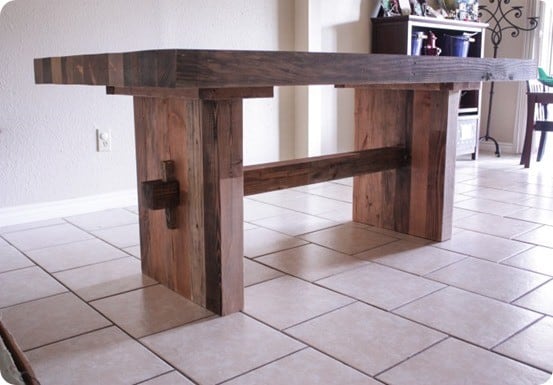 Kathy of The Budget Decorator shares how simple it is to replicate the look of West Elm’s pricey terrariums for only $2.

It probably comes as no surprise that the dollar store is involved in this thrifty project.

This is the perfect way to bring some green into your home for spring! 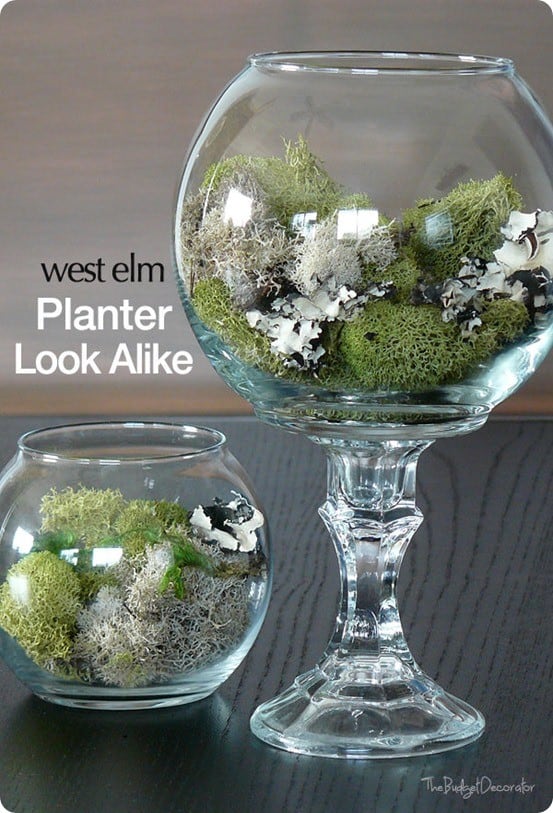 12. Round Bistro Table with Concrete Top

Jamison of Rogue Engineer and his wife Jamie were shopping when they came across a table with an x-brace base.

They thought it looked easy enough to make but decided to put a different spin on it with a concrete top.

This was the couple’s first time working with concrete so don’t be deterred if you are a newbie too. And can you believe this table was made for under $20?!? 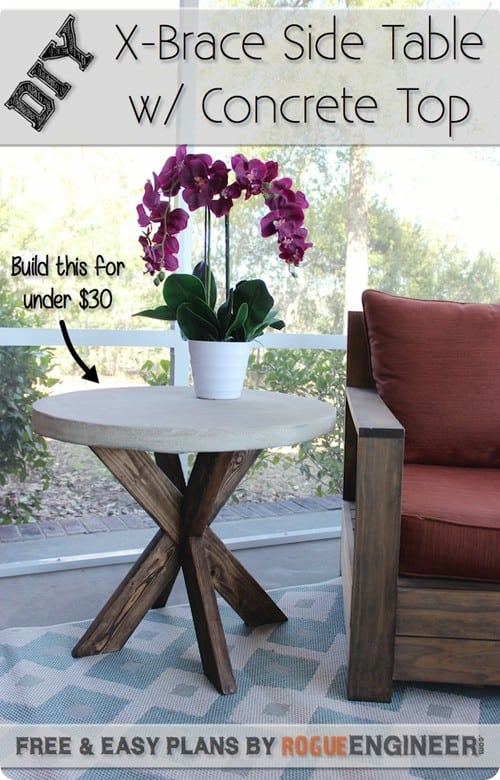 Lacy from The Inspired Nest created these gorgeous shabby finials with a little paint and some sandpaper.

Her original inspiration came from the Distressed Wood Finials from Pottery Barn which range from $69 – $99. 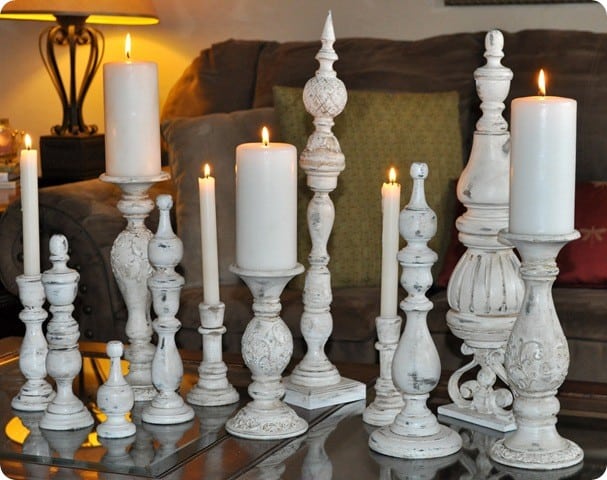 Jamison of Rogue Engineer had been wanting to replace the glass top side tables in his living room for some time.

He found a table online he liked that features a trestle style base and knew he could make it for much less than the $374 price tag.

Here’s the amazing part… Jamison shares the free plans to build it for under $20… with limited power tools… in a weekend. 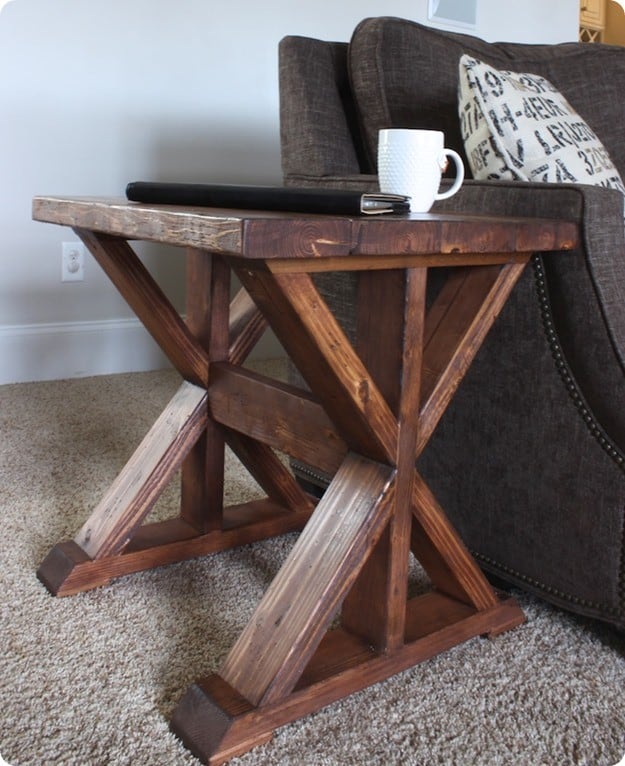 15. How to Make Cotton Stems for PENNIES!

Do you love the organic look of cotton stems?

Sara from Twelve on Main shows how to make them yourself using items you likely already have or could find in your backyard – branches, pinecones, and cotton balls!

Sara simply hot glued the cotton balls onto the branches and then added a few pinecone scales to each one.

I love how realistic they look and the fact that they cost pennies to make! 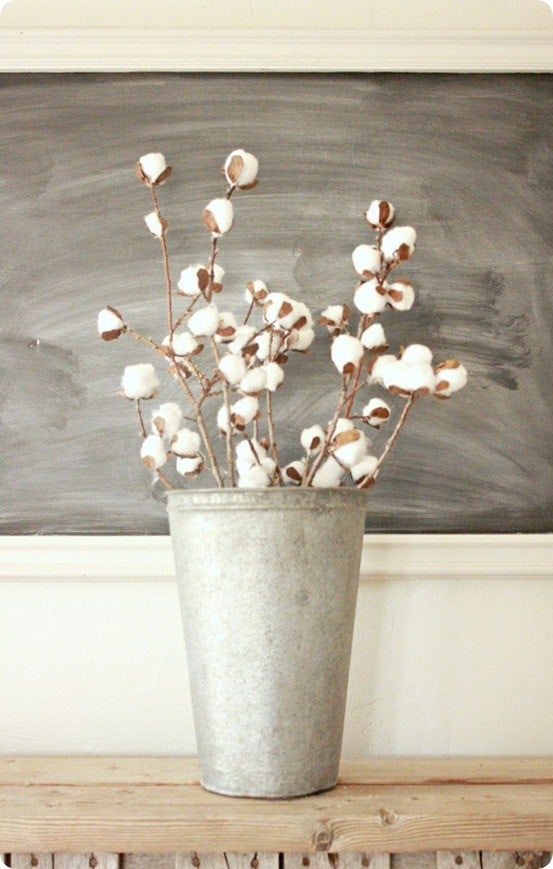