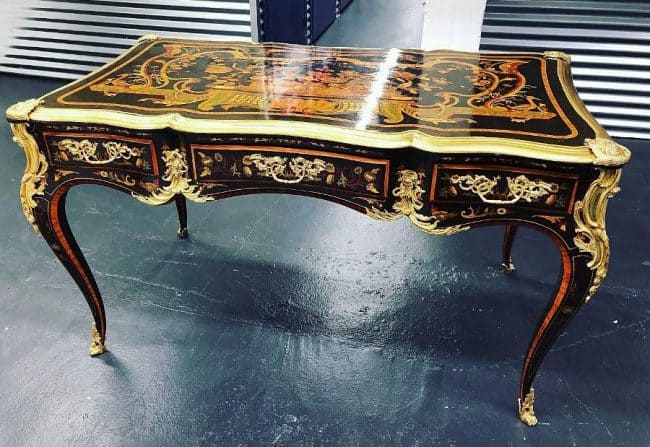 Who says a writing desk can’t be a masterpiece? Definitely not the French! I think we can all agree that everything French just screams chic.

From the Eiffel Tower and the Arc de Triomphe, all the way to their delectable croissants, the French have always been known to have immaculate taste and to enjoy the finer things in life.

Not only does their impeccable taste apply to architecture and cuisine, but it also applies to homes and furniture.

Most, if not all, traditional French homes included a library for both reading and writing.

And in those libraries, you can find the largest bookcases you’ll ever see, sometimes a fancy fireplace and a comfortable writing chair.

Not to mention the most crucial piece of furniture in every French library: a beautifully designed writing desk, also known as a bureau plat desk.

Let’s take a stroll in the world of French bureau plat desks and find out everything there is to know about them. Allons-y!

What Is a Bureau Plat? 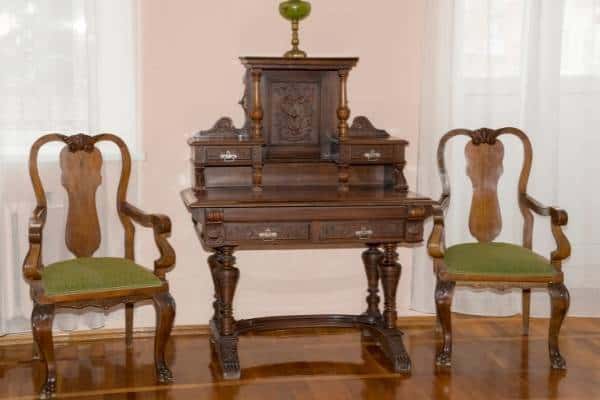 A bureau plat desk, in its most basic definition, is a flat-topped writing desk that’s supported by four legs and designed in ornate French styles, like Art Nouveau or Louis XVI.

Most bureau plat desks have one shallow central drawer, as well as corresponding drawers at either side.

Bureau plat desks are also referred to as leg desks. 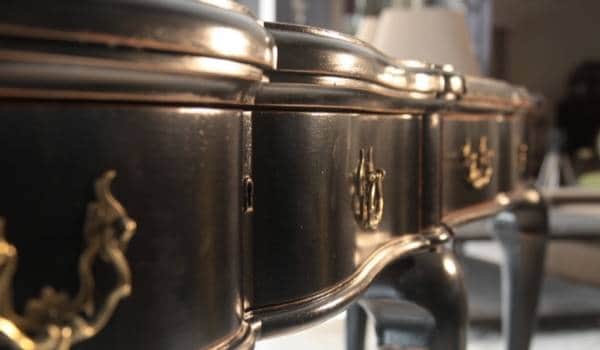 Essentially, each French king or ruler had his own distinct style that set him apart from other monarchs.

Each reigning period’s furniture design was directly linked to whoever was ruling at the time.

As a result, when a piece of furniture was created during the reign of a certain king, it was named after him.

There are no records of when the first bureau plat was created. It’s supposed to have appeared towards the end of King Louis XV’s reign!

When King Louis XV reigned during the Régence period, which was between 1715 and 1723, bureau plat desks were commonly made of black timber like the one shown here: 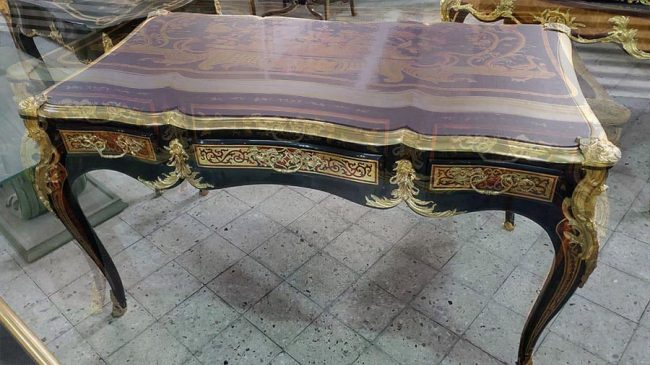 They also had beautiful marquetry and polished silver and bronze on the knobs and locks.

During King Louis XVI’s reigning period, which was between 1774 and 1792, the style of the bureau plat underwent a few changes. 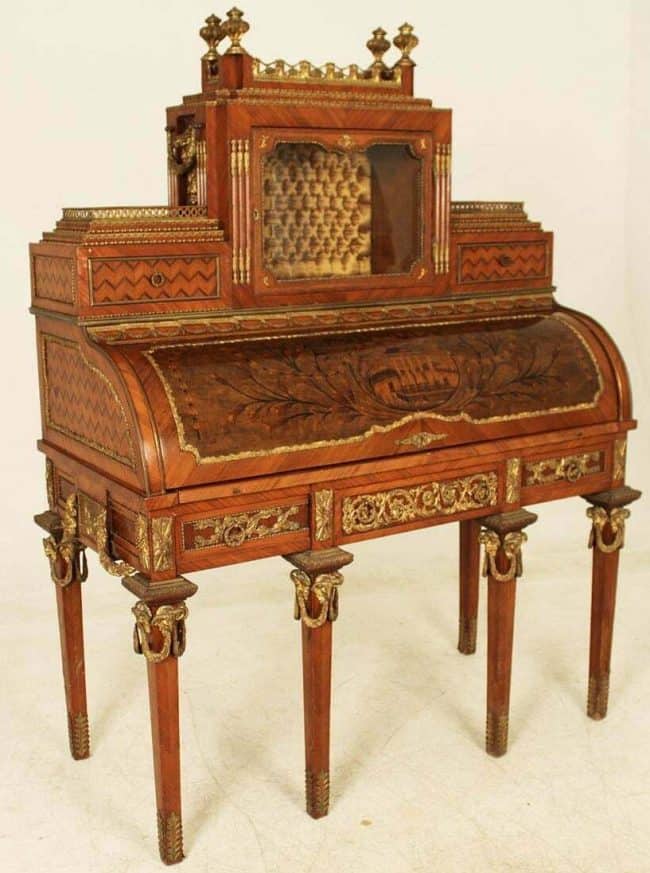 For instance, instead of pearwood, it was constructed of mahogany wood and mahogany veneer.

This was believed to have made the table sturdier and more solid.

A crossbar was also added to connect the legs.

However, the shape of the table legs stayed the same.

The surface of the bureau plat is typically made of leather. It’s also designed to have practical drawers under the surface.

These drawers would store anything from writing tools like quill pens, sheets of paper to Marie Antoinette’s hidden love letters!

How Was the Bureau Plat Desk Made? 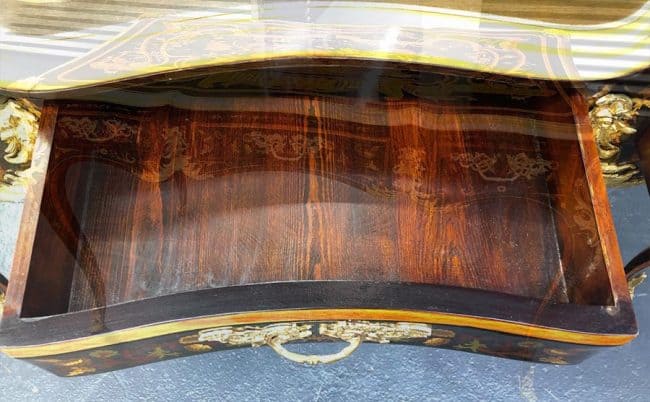 By taking one look at this writing desk, you’ll already be able to tell that its construction required a master craftsman.

This is because most bureau tables have extremely precise floral designs.

Artisans also added ormolu artistry on the edges and on the cabriole legs, which adds both sophistication and sturdiness. 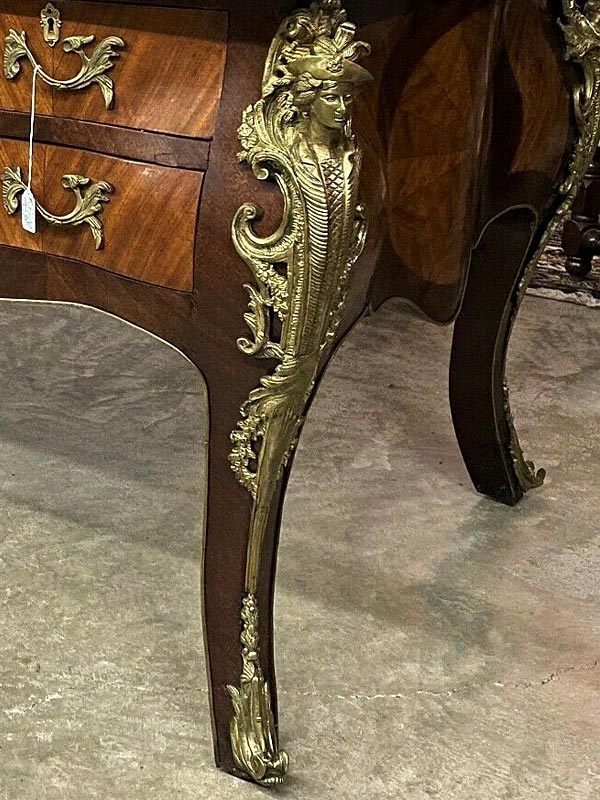 They even used luxury veneers such as mahogany, rosewood, and satinwood.

The bureau’s legs were given shiny ormolu pieces to really give the table that extra bling, like in this video.

This is because of their slimmer legs and tabletops. 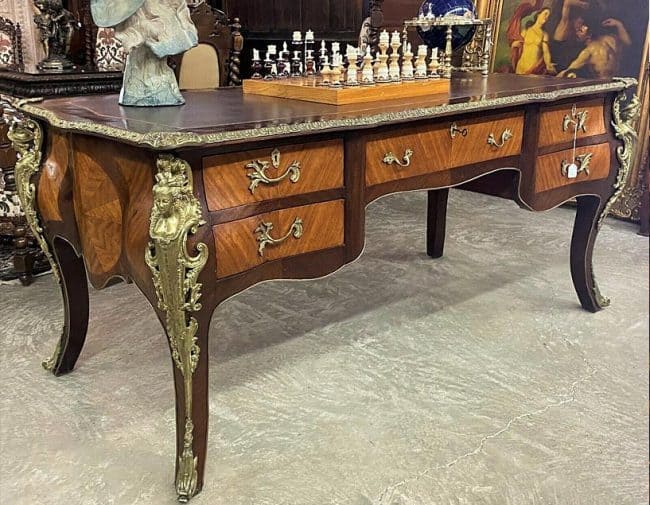 What’s great about bureau plats is they look absolutely stunning from all angles, meaning they can be placed in the center of the room and will grab all the attention.

Aside from looks, bureau plats are extremely practical due to their spacious writing surface and several drawers. 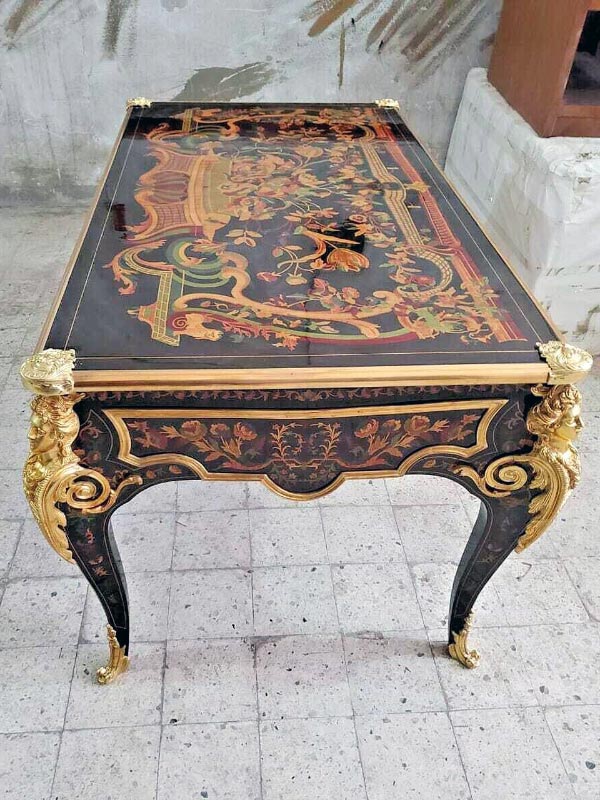 What’s Not So Great About the Bureau Plat desk

Although having an antique French bureau table seems like a great idea, it also comes with responsibilities.

Say you bought a French bureau at an auction or from an antique store at a surprisingly low price.

You might think you’re getting a pretty sweet deal, right?

Most antique bureau desks require a ton of restoration. This, of course, depends on how well they’ve been maintained over the centuries.

For example, if they’re missing a handle or a key, finding a replacement would be like finding a needle in a haystack!

Not only is it a hectic process, but it’s also really expensive.

What Does Bureau Mean?

A bureau is a writing desk that can have a slant top and one or more drawers.

In the U.S. we typically refer to bureau furniture as a larger dresser located in bedrooms. See our guide all about the bureau dresser to learn more!

What Is the Difference Between a Writing Table and a Bureau Plat?

The main difference lies in style. A bureau plat is nothing more than a writing table designed in a French style.

What Is the Difference Between a Writing Table and a Trestle Desk? 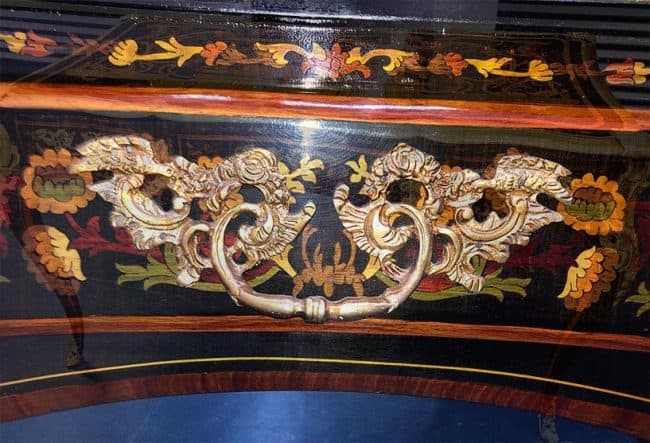 The French writing desk, also known as bureau plat, is a great way to add history, elegance, and practicality to your home.

It features a large workspace and drawers to store your things.

Not to mention, It also looks absolutely stunning!