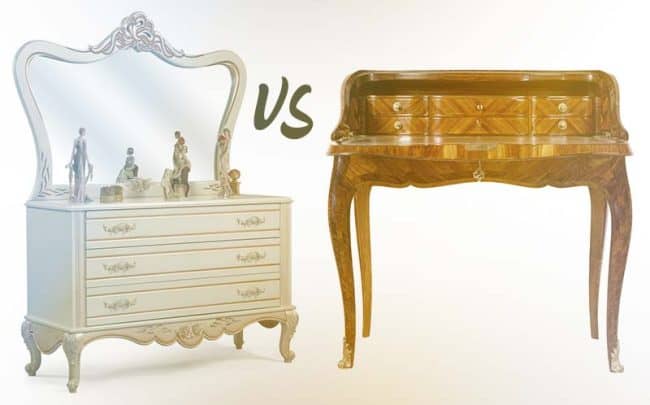 I think we can all agree that the term “bureau dresser” is very confusing.

There’s sort of a global misunderstanding when it comes to what a dresser or a bureau is, and matters are only worsened when the two words are combined!

In the following guide, I’ll be explaining the meaning of a bureau, a dresser, and a bureau dresser.

I’ll also be sharing examples to help you better understand the differences and uses between them.

What is a Bureau vs Bureau Dresser?

In Europe, the term “Bureau” is what they call a writing desk with a hinged flap for writing.

When closed, this flap is sloped, and when opened, you can see a set of small drawers and pigeonholes for various storage options (sometimes accompanied by a small cupboard).

In the United States, a bureau is what they call a chest of drawers often paired with a mirror and located in the bedroom.

So in one region, people use a bureau in an office or a writing space.

In the U.S., it’s often found in the bedroom and used interchangeably with the term dresser.

Bureau is a French word that originally meant “cloth covering for a desk”.

From there, bureau-related furniture developed gradually to mean desk, and eventually, dresser.

Then, people started using the term to refer to an office or a room containing several desks.

Let’s take a look at the history of bureau furniture:

During this period, desks with sloping surfaces that open and close were first referred to as bureaus.

During the period between 1702 and 1714, the initial bureau desk evolved to become a writing table (made of oak or walnut wood) with a kneehole at the center and drawers on each side.

The 1750s marked the first appearance of the pedestal and partner’s desks.

During this period, bureau desks were mainly constructed of mahogany wood and featured decorative carvings.

And yep, still no official bureau dresser as we know it today…

This period was the beginning of the Industrial Revolution, which brought about a new social class; the business or entrepreneurial class.

People belonging to this class used bureau furniture for practical and fashionable purposes at home and work. 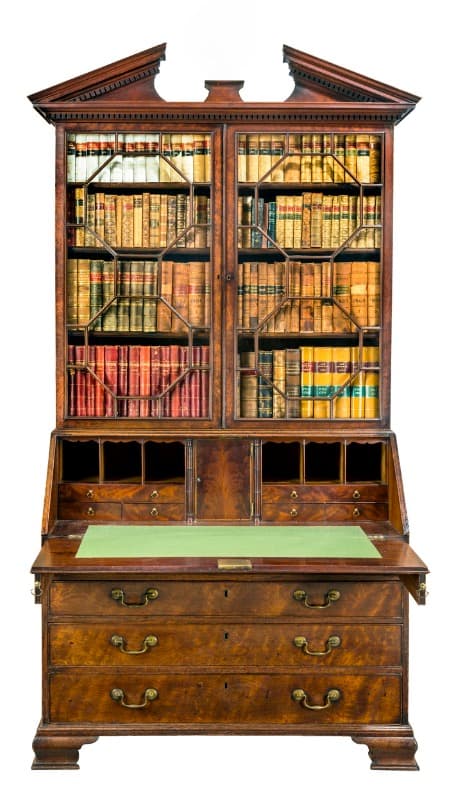 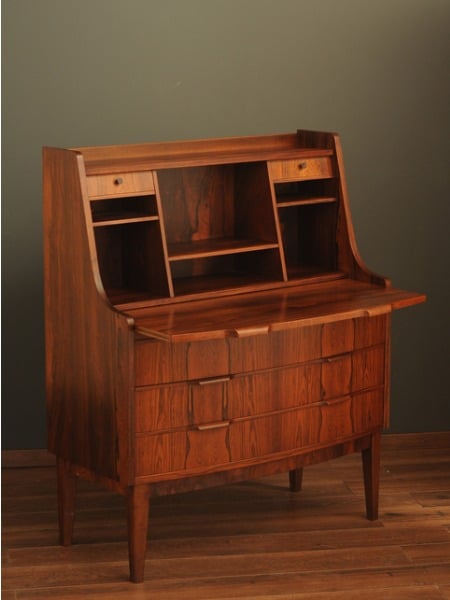 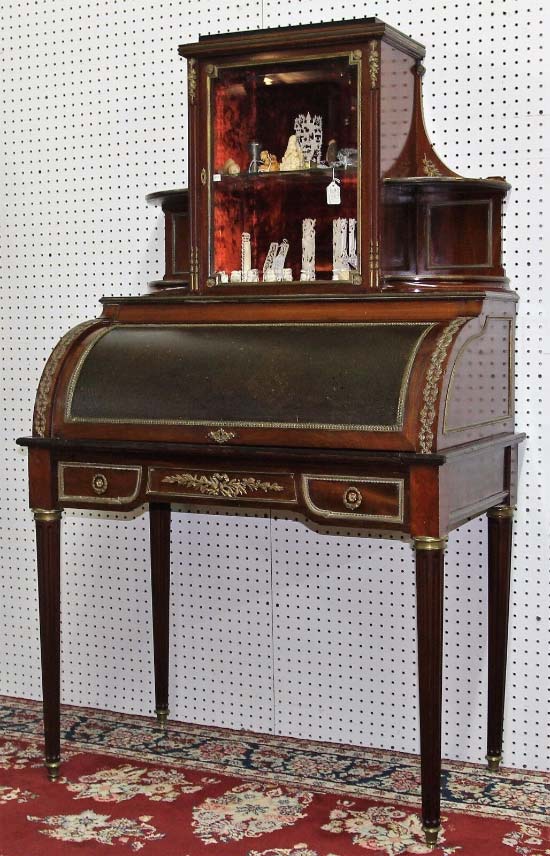 These still don’t look like the bureau dresser you might expect to put in your bedroom, right?

What is a Dresser?

We all know this one right?

A highly popular piece of furniture, you can find a dresser in just about every bedroom out there.

A dresser typically refers to a chest of drawers used in bedrooms, featuring a low profile with an elongated design.

Dressers are available in a wide variety of styles, sizes, and colors, but they usually possess 2 to 6 drawers and are larger than chest drawers with more depth.

What’s more, many dressers are made with a matching mirror that’s fixed in the back, allowing people to dress in front of the unit.

This is where the name “dresser” came from.

When it comes to home decor, a dresser offers a practical yet stylish way to fill space if a bedroom seems too big or empty while adding an inviting feel. 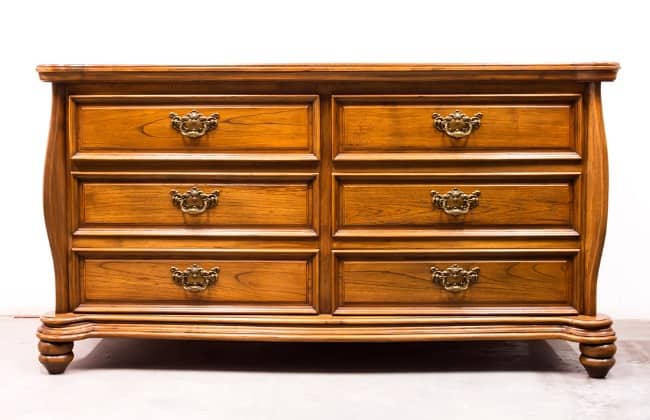 Standard or horizontal dressers typically feature 2 or 3 rows of long and wide drawers.

Sometimes, an extra row of a few small drawers is added at the top.

This dresser type provides lots of space both for storage and display.

For example, a collection of books or a selection of perfumes.

There also may be a mirror included. 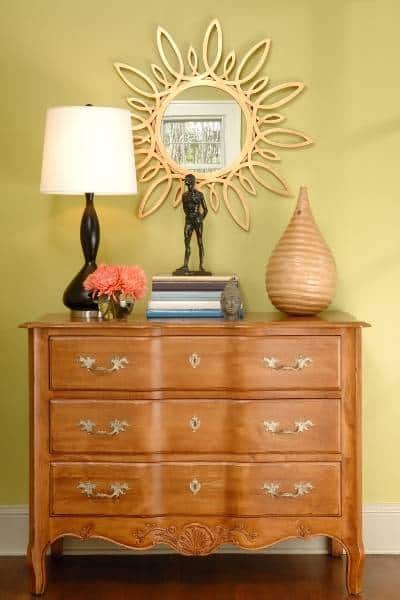 This is a particularly wide variation of dressers, consisting of dual columns of wide drawers.

Double dressers are perfect for couples sharing a master bedroom and they go great with a mirror on top. 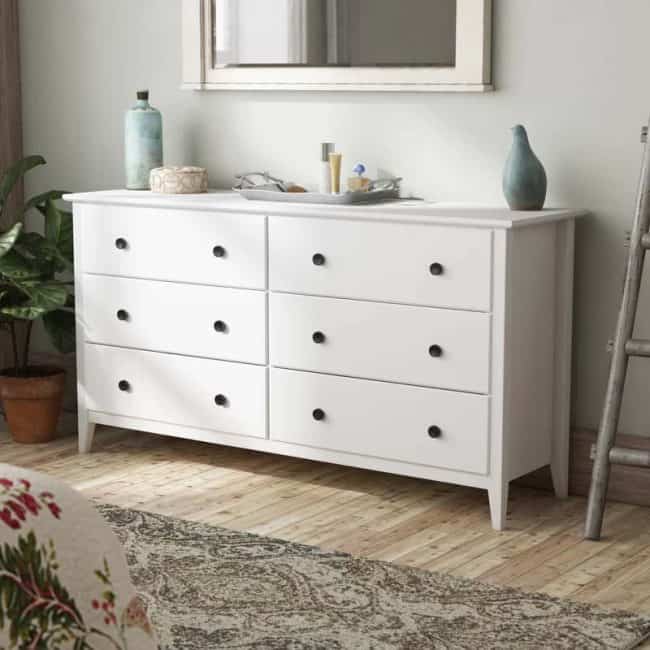 This is a standard dresser but with the addition of 1 or 2 cabinets on the side or in the middle.

Such a modification allowed for easier organizing of clothes thanks to the presence of both drawers and compartments with shelves or space for hanging garments. 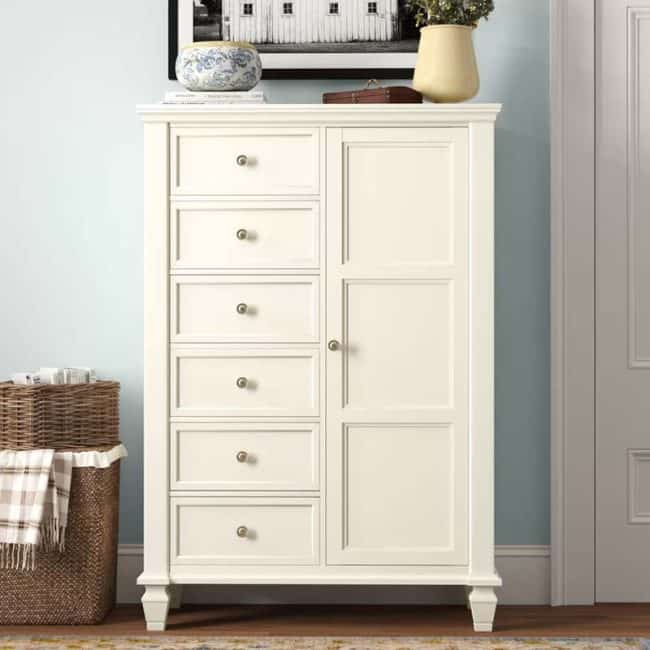 Talk about sophistication…this one has it and more. See at Wayfair!

What is a Bureau Dresser Exactly?

A bureau dresser is a chest of drawers that combines the characteristics of a desk bureau and a dresser to create a piece of furniture featuring multiple drawers of different sizes and a mirror. 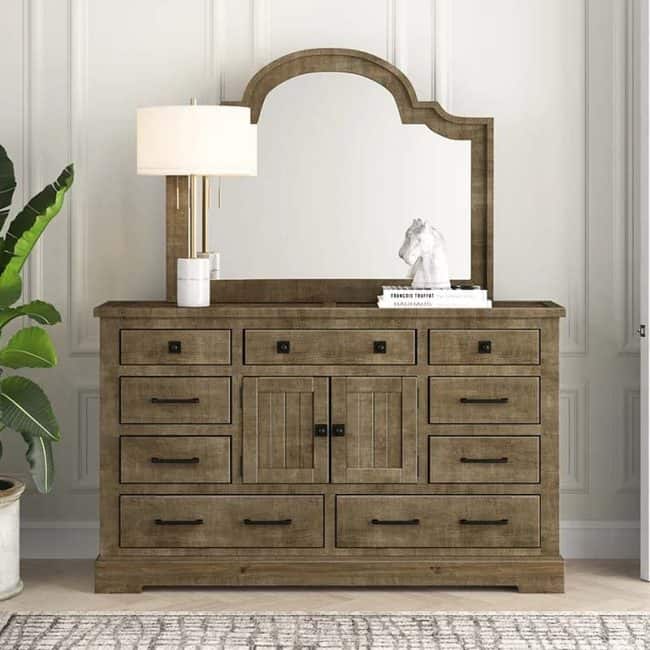 A bureau dresser is a lot closer to a conventional bedroom dresser than an office bureau.

Alternatively, a bureau dresser is called a dresser and bureau set.

Check out this gorgeous, rustic bureau dresser as another reference: 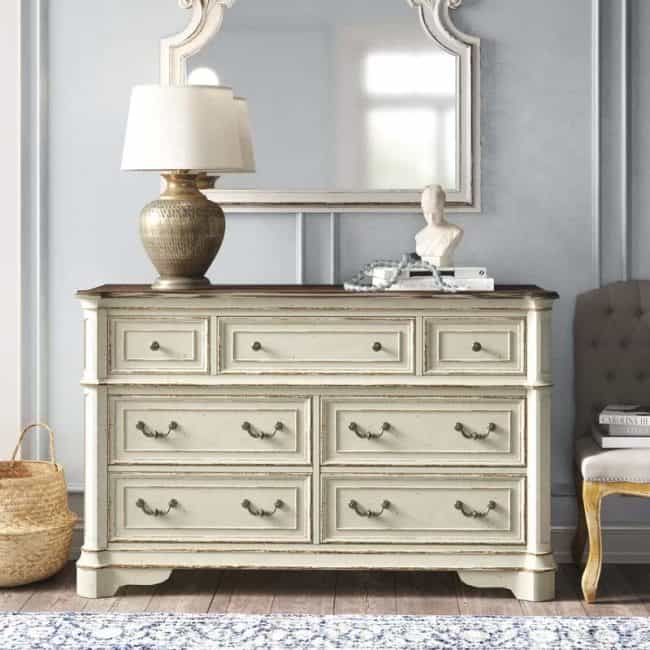 Check this out and buy at Wayfair

What is the Difference between a Dresser and a Bureau?

The key difference between a dresser and a bureau is their location in the house and what they’re used for specifically.

As for the top of this piece of furniture, the desk bureau is traditionally used for writing while the bedroom bureau is used as a place to put jewelry, hair products or bedroom decor items.

The main similarity is that they are usually both made of wood and function to store things of varying sizes. This is where the multiple drawers for each come into play.

While a dresser is typically found in a bedroom or closet, a bureau usually resides in an office or library.

There you have it, a complete guide on the bureau dresser, the difference between the two chests of drawers, their types, and how you can best use them in your house.