While planning her son’s menswear-inspired bedroom, Angela from Blue i Style came across leather belt shelves from CB2.

She loved the idea of them, but they were too long for the space, and at $100 each, not in the budget.

To tie in with the other menswear elements of the room, Angela wanted to recreate the concept of the shelves for less using real belts – buckles and all.

Angela purchased inexpensive matching belts from a retail store for $8 each and used them to hang two display shelves.

Her shelves rang in at just $23 each {a $77 savings!}, but you could whittle the price down even more by using mismatched thrift-store belts. 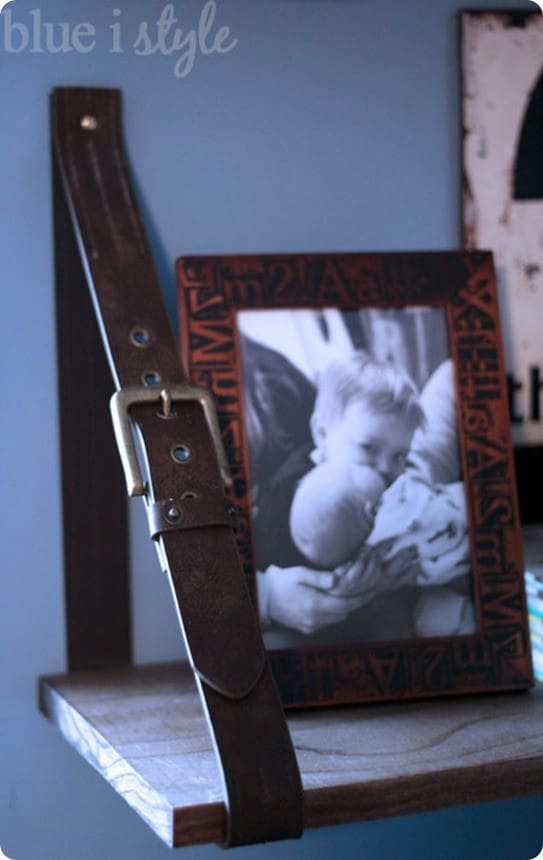 The steps for this project are fairly straightforward. How hard can it be to strap a belt around a piece of wood and then screw it to the wall, anyway?

Well, as Angela found out there are a few things she needed to work out along the way. Those things are now some great tips for you to do one of these yourself.

Tips to Make Your Own Belt Shelves

The biggest obstacle (read: thinking challenge), that Angela came up against was how to position the belts so the buckles would face forward. You want to see these centered on both sides to really see the personality of this piece.

The other hurdle was making sure the shelf boards themselves stayed level, and didn’t lean forward. Otherwise, whatever goes on the shelves wants to fall off…and that just doesn’t look good.

To figure both of these out, Angela needed to fold and position her belt ahead of time on the floor and with an imaginary wall. She held them in place so she could take a measurement of how far until the belt hugs the wall vertically and tightly.

She then applied that value to all four of her belts for the two sets of shelves. 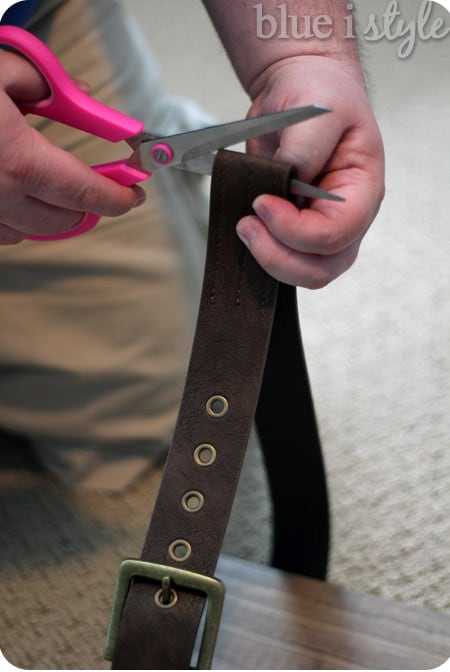 When it came time to secure the belts to the wall, she cut the belts. This will allow you to easily screw both ends of the belt strap together, and securely fasten them into the wall.

The measurement you take when you “mock up” your belt on the floor will tell you where to cut.

Once the belts are up and screwed into the wall, you can simply slide your stained wood boards into place. They actually stay locked in really well on their own. But if you have kids, like Angela, it’s best to use some short screws to fasten the belts underneath the boards.

Now, you have a pretty solid shelf with A LOT of character!

You don’t spend the couple hundred dollars these cost at CB2. Even inexpensive belts will do and look great, so your overall spend for this project (for two sets of shelves) is less than $50.

Angela was inspired by the original Belt Shelf, from CB2. The CB2 version had no buckles showing? It’s as if the CB2 designers missed one of the obvious ways to justify charging even remotely what they were asking. Shame, shame…

We think Angela’s version turned out way better. Just think of the possibilities of what you can display on these. You’ll be in Pinterest heaven!

Now, it’s your turn to create your very own.

Go to Blue i Style for the complete tutorial, with detailed steps and lots of tutorial photos and after pics to whet your DIY appetite.