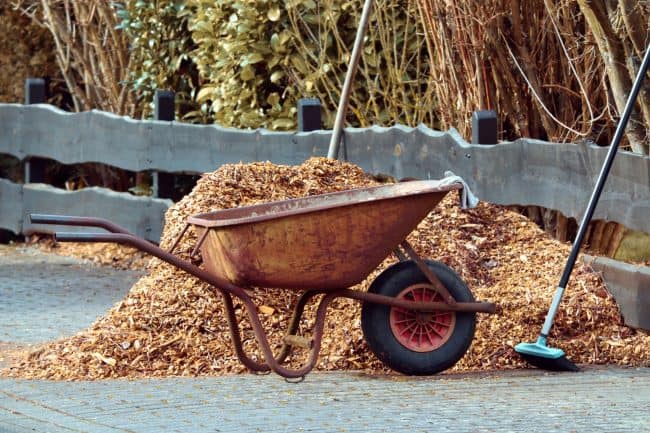 Did you know that mulch chips can make your plants grow quicker? On the other hand, bark chips are excellent for covering yard and garden pathways.

When it comes to the whole mulch vs wood chips debate, it might be a little difficult to make the right choice.

Ready to get your garden started, but not sure what situations work best for wood chips vs mulch? Find the answers to these questions and more from expert arborists!

All About Wood and Mulch Chips

Don’t know the difference between traditional mulch chips and black wood chips? We’re here to help. For starters, wood chip landscaping is much more similar to mulch landscaping than you would think.

It’s not uncommon for gardeners to use both these inorganic and organic materials to cultivate a plant species. Not only do mulch and wood chips nourish plants, but they also help to protect your garden as well.

But here’s the catch: despite their similarities, wood and mulch chips add up to different things in the world of landscaping and gardening.

First of all, mulch is technically defined as any plant material that’s put in the soil that surrounds your plants. Normally organic, mulch can be used to all sorts of things:

Amazingly enough, using organic mulch can even boost the activity of microorganisms in the ground. Overall, mulch reduces soil compaction and increases soil quality too. Plus, mulch gives landscape and garden environments a natural, uniform feel.

Mulch can even reduce the impact of using a lawnmower near your garden bed. Particular types of mulch such as pinewood chips, cypress, and cedar are perfect for getting rid of things like fleas, gnats, and ticks.

Is your area freezing cold during the winter? If so, then there’s no harm in adding some mulch to your garden to repel injuries caused by frostbite.

As if that’s not enough, mulch can be made out of several different materials, including inorganic and organic substances. But how many different types of mulch are out there, anyway? 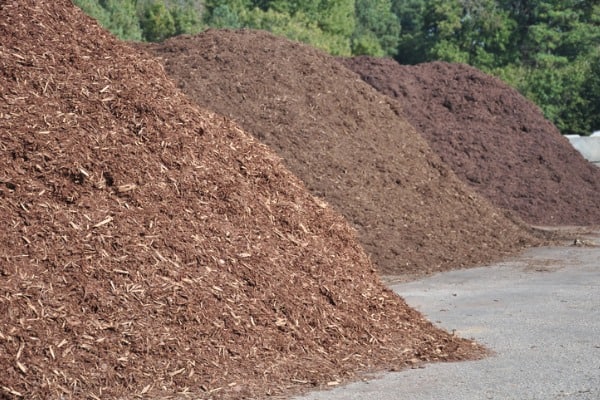 Curious about all of the different types of mulch out there? We’ve got you (and your garden) covered. First of all, some of the most popular kinds of organic mulch on the market include the following:

Other trendy types of organic mulch like shredded hardwood material, pine needles, and leaf mold. Don’t forget about additional types like coffee grounds, pecan shells, and compost. If you save your kitchen scraps, you may be able to cover your garden in organic mulch for free!

Thought we were done? Crazily enough, even so-called “ground cover” plants such as ivy and periwinkle count as organic mulch.

In case you didn’t know, wood chips are just another form of organic mulch for gardeners and farmers. Due to its sturdy nature, wood chips are the ultimate choice for paving a path through your garden bed.

You can use inorganic mulch, too, which includes everything from pebbles and crushed stones to gravel and plastic sheeting. Fake pine needles, rubber, and woven ground cloth are also used as inorganic mulch.

Even though inorganic mulch lasts longer and won’t break down in your garden, there are a few disadvantages to keep in mind. For one, inorganic mulch is typically unable to add nutrients to your soil. Also, some types might keep nutrients from getting to the roots of your plant altogether.

That being said, inorganic mulches are aesthetically pleasing. Besides this, they’re wonderful at preventing weed growth. But what’s the real deal about using wood chips as mulch? 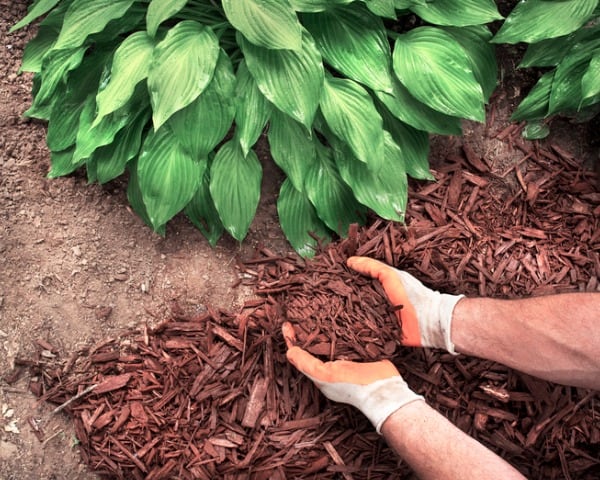 Ever thought about using wood chips as mulch? It’s a good idea to consider. Wood chips are made up of ground-up pieces of bark or scrap wood, which work well with:

Not sure why wood chip mulch is such a great idea? Let us explain.

For starters, wood chip mulch helps increase the survival rates of miniature trees like nothing else. It also prevents damage to plants in places with intense rainfall.

For those who are wondering how to use wood chip mulch, some experts recommend that you apply anywhere from two to four inches of wood chips to the base of your plant.

Also, be sure to spread out the wood chip mulch in a circle that is at least three to six feet wide in diameter. Our general rule of thumb is that the bigger your plant, the wider and deeper the area of mulch needed. Of course, the precise amount of wood chip mulch that you need varies on the mulch chip size too.

In spite of its many benefits, there is a downside to using wood chip mulch, and misusing it could potentially be dangerous to your plants.

When wood chip mulch is left outside for a long time, it starts to lose its oxygen circulation, which can cause it to produce harsh compounds and acids.

It gets worse: if you live in a super sunny region, then your wood chip mulch could even create vapors that kill your garden bed.

Have some sour-smelling wood chip mulch on your hands? All you have to do is make sure you spread out your mulch before you mix it with your plants! 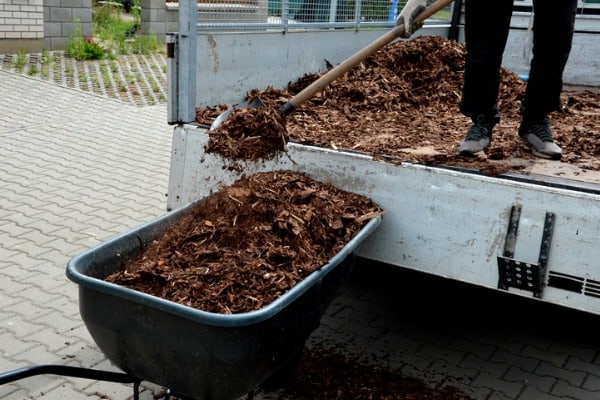 Are you asking yourself, should I go with chunky or shredded mulch? Despite the fact that bark mulch and wood chips look identical, each one has its own benefits for your garden bed.

Also, those that prefer shredded mulch often receive recycled wood from the paper and lumber sectors.

Just like you’d imagine, shredded wood chip mulch is made up of tiny chunks and shredded bits.

Depending on where it comes from, it might have small pieces of leaves and bark too.

Meanwhile, wood chip mulch usually has much bigger chunks than shredded mulch does.

Some pieces of wood chip mulch can measure about three inches in width and one to five inches in height.

Another perk of larger wood chips is that they have a lot of healthy chemicals that can add nutrients to your soil.

Plus, wood chips normally break down much slower than their shredded alternatives as well.

Sometimes you can get free or discounted wood chip mulch from people or companies that trim trees. Better yet, all you have to do is cut up a few fallen branches to make your own wood chip mulch. 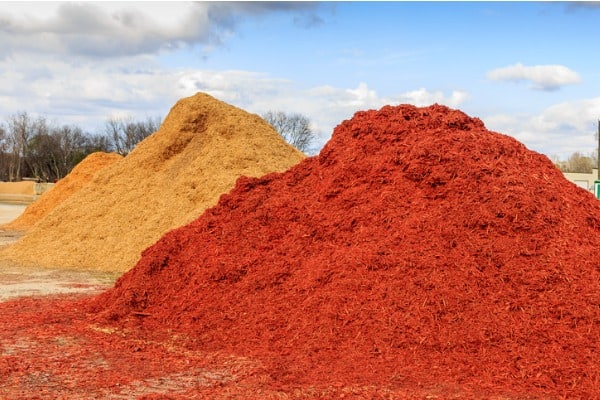 There’s one final topic in the mulch debate left to cover: treated vs untreated wood.

Untreated wood chip mulch is better for the environment, but won’t do a great job of suppressing weeds. It also has the potential to attract termites, especially if you live in an area where they’re common.

Treated mulch either comes from recycled wood that was pressure-treated in a previous life or has been pre-soaked in herbicides. This means it does a great job of blocking weeds, but it isn’t organic.

Pro tip: treated or untreated, stay away from dyed mulch. It could be full of chemicals that can harm your plants. If you must have a colorful garden floor, look for mulch that’s colored with natural dyes and only use it for the top layer.

Wood Chips Vs Mulch: Which One Is Best?

When it comes to wood chips vs mulch, it can be pretty overwhelming to figure out which one is best. While each has its pros and cons, the reality is that the choice is up to you.

From analyzing the weather conditions of your area to thinking about your commitment to sustainability, our handy guide will help you make your final decision that much easier.

Are you someone who’d rather rip up their garden bed than add anything artificial to it?

If that sounds like you, then we highly recommend that you go with your favorite organic mulch.

But for those who want to score mulch on a budget, you can’t go wrong with getting discounted mulch from your local tree trimming business.

Whatever you choose, you won’t regret adding mulch to your garden.

Want to learn more great home and garden tips? Take a look at the rest of our blog today!