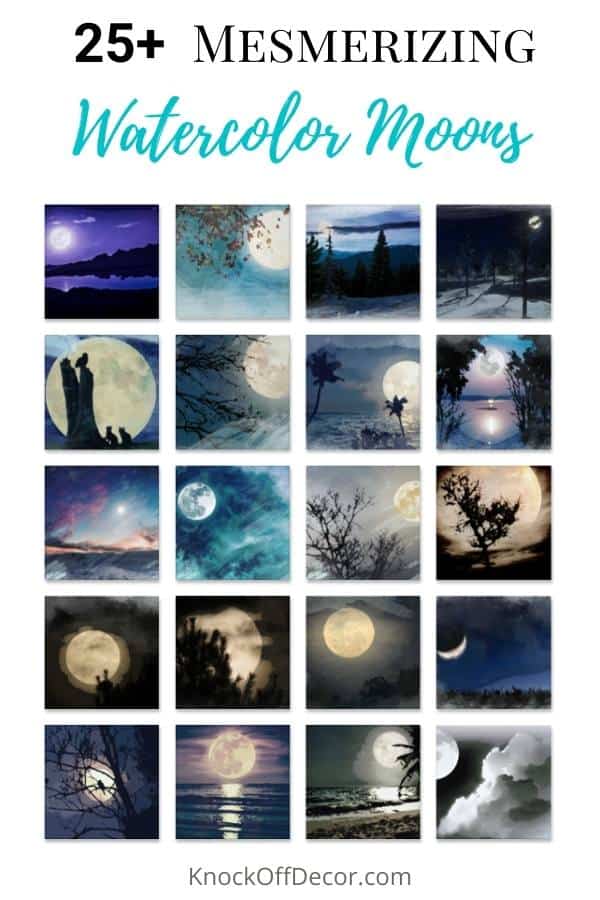 Luna; commonly known as the ‘moon’ is the brightest object in the solar system after the sun. It is also the nearest celestial body planet Earth and its only natural satellite.

The moon’s forlorn beauty has spurred curiosity and fascination throughout history. It has inspired several symbolic traditions and rich cultures.

The moon has been regarded as a deity in the former civilizations as its power has a rhythmic control over tides and the movement of the Earth.

From poets to composers to writers and painters, the moon has always been regarded for its romantic yet, mystical beauty. Truly a muse all in its own.

Today, we will be looking at the gloomy but incredibly fascinating moon from the eye of a watercolor artist. Let’s begin. 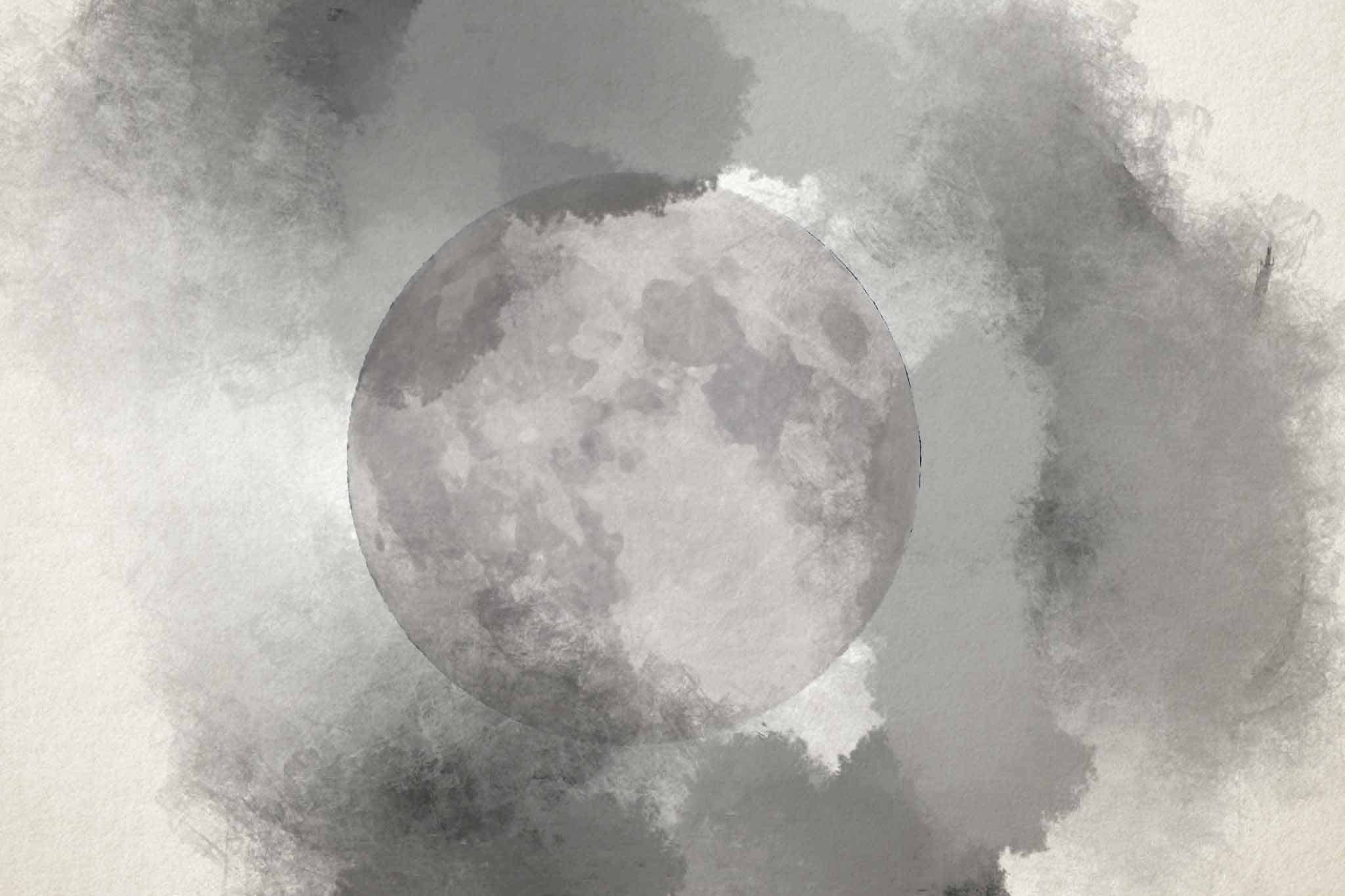 A full moon softly rises from behind the smoky clouds, proffering a diffused light on the surface of the earth. 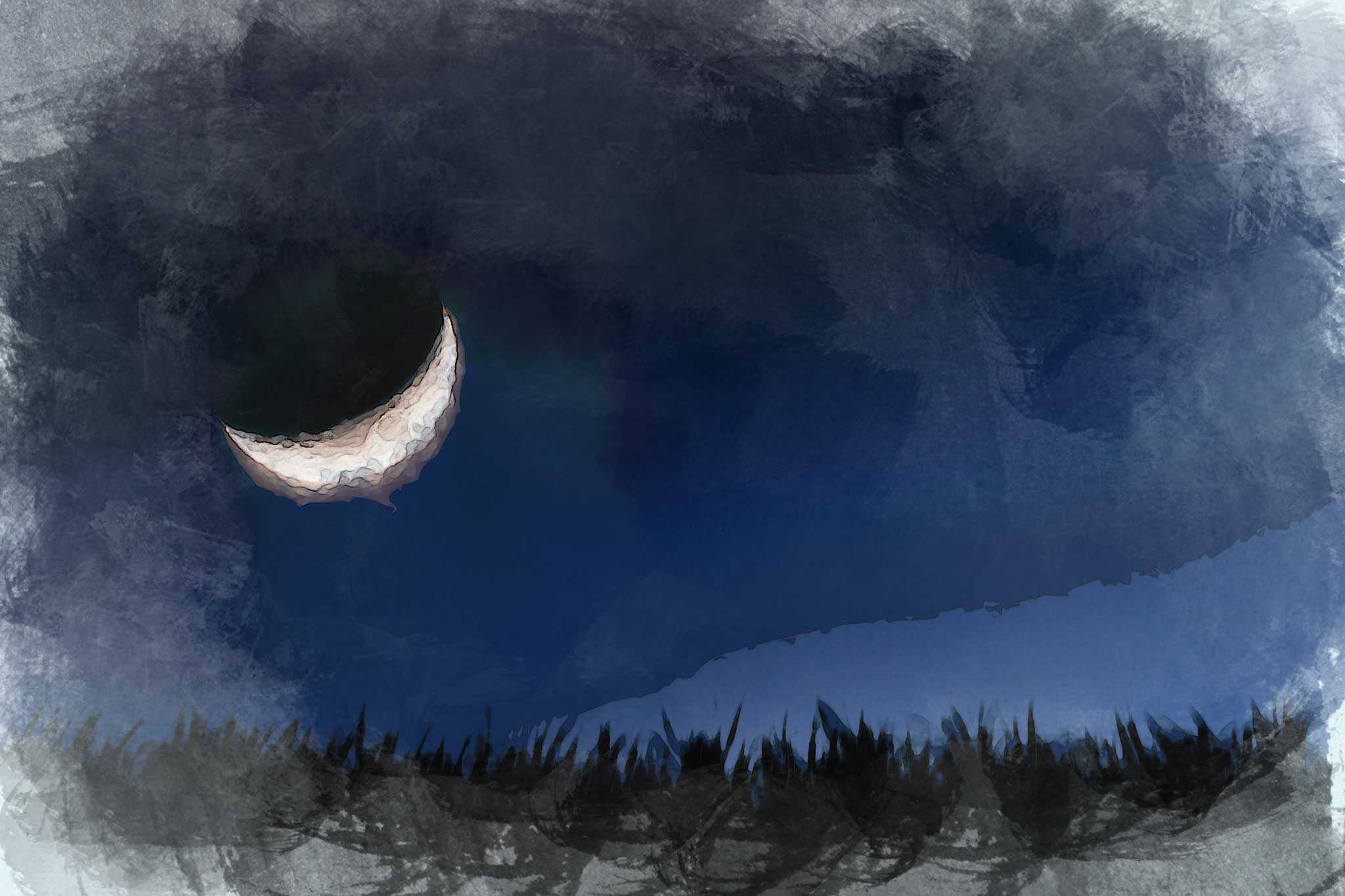 On a night, the waxing crescent shines endlessly.

The rich cobalt blue background fused with gray clouds adds a theatrical effect to the painting. 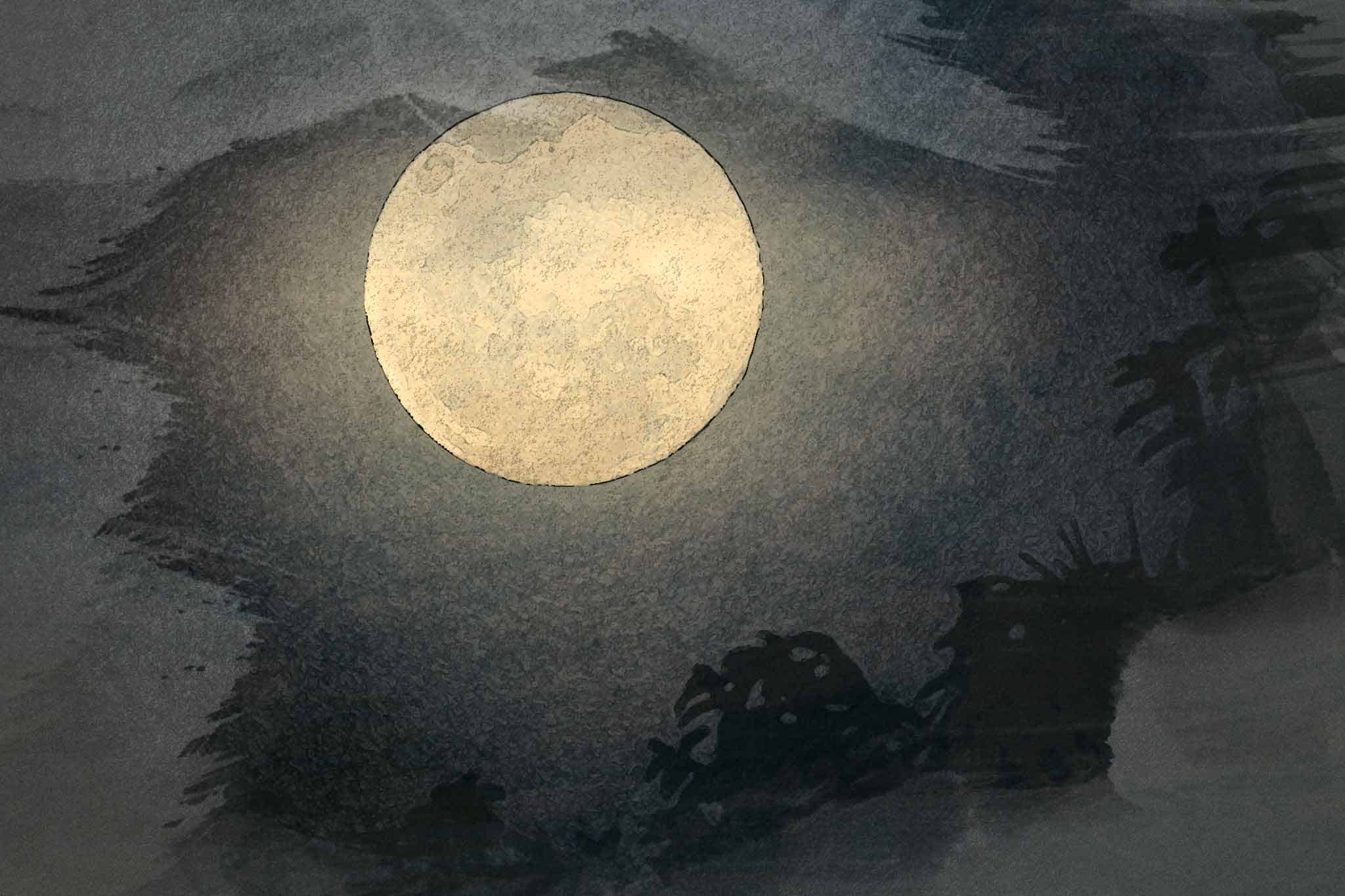 Notice how the applied artistic techniques make the moon shine such bright that it almost looks like a photograph. 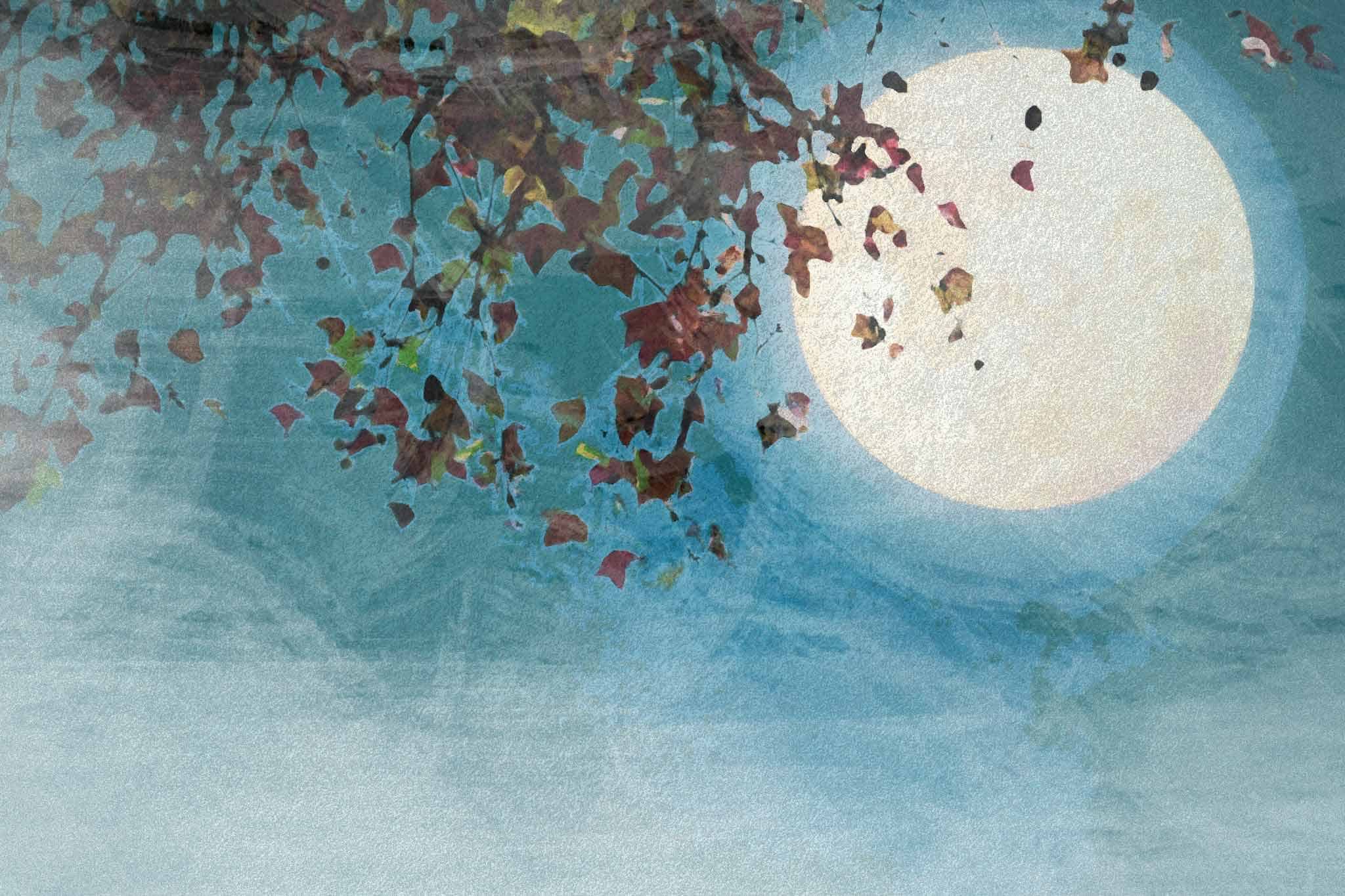 Balancing the composition with a clean lower half while the subjects rest on the upper half of the canvas.

Once again, the bright light of the moon hits the viewer’s eye leaving an everlasting impact. 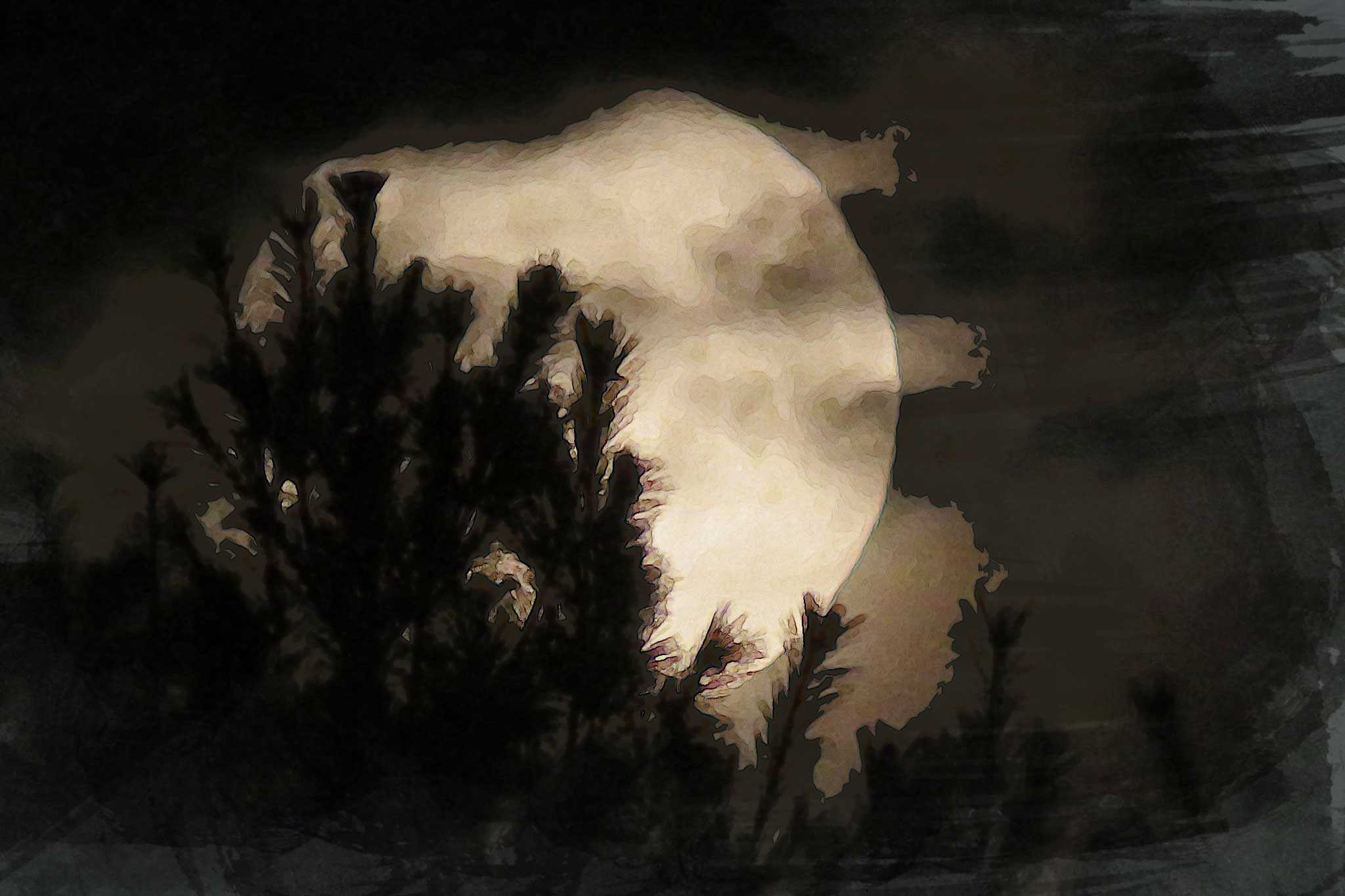 The full moon’s magnitude and the soft blended colors against a dark and deep night cast a magical spell on the onlooker. 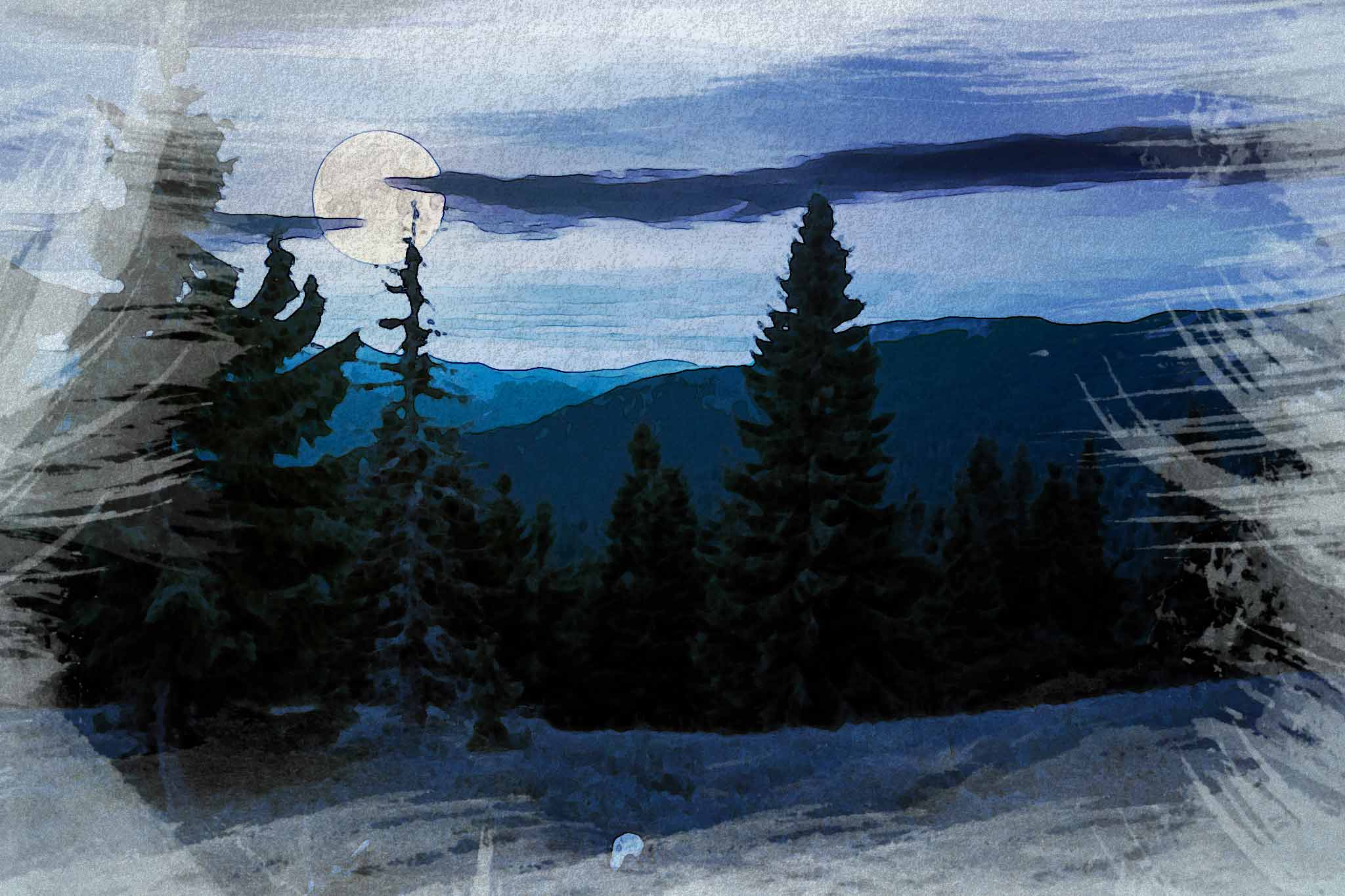 A beautiful sight indeed, where you quietly sit on a mountain inhaling the smell of fresh pines.

And with the scenic view of the moon shining over the mountain peaks. 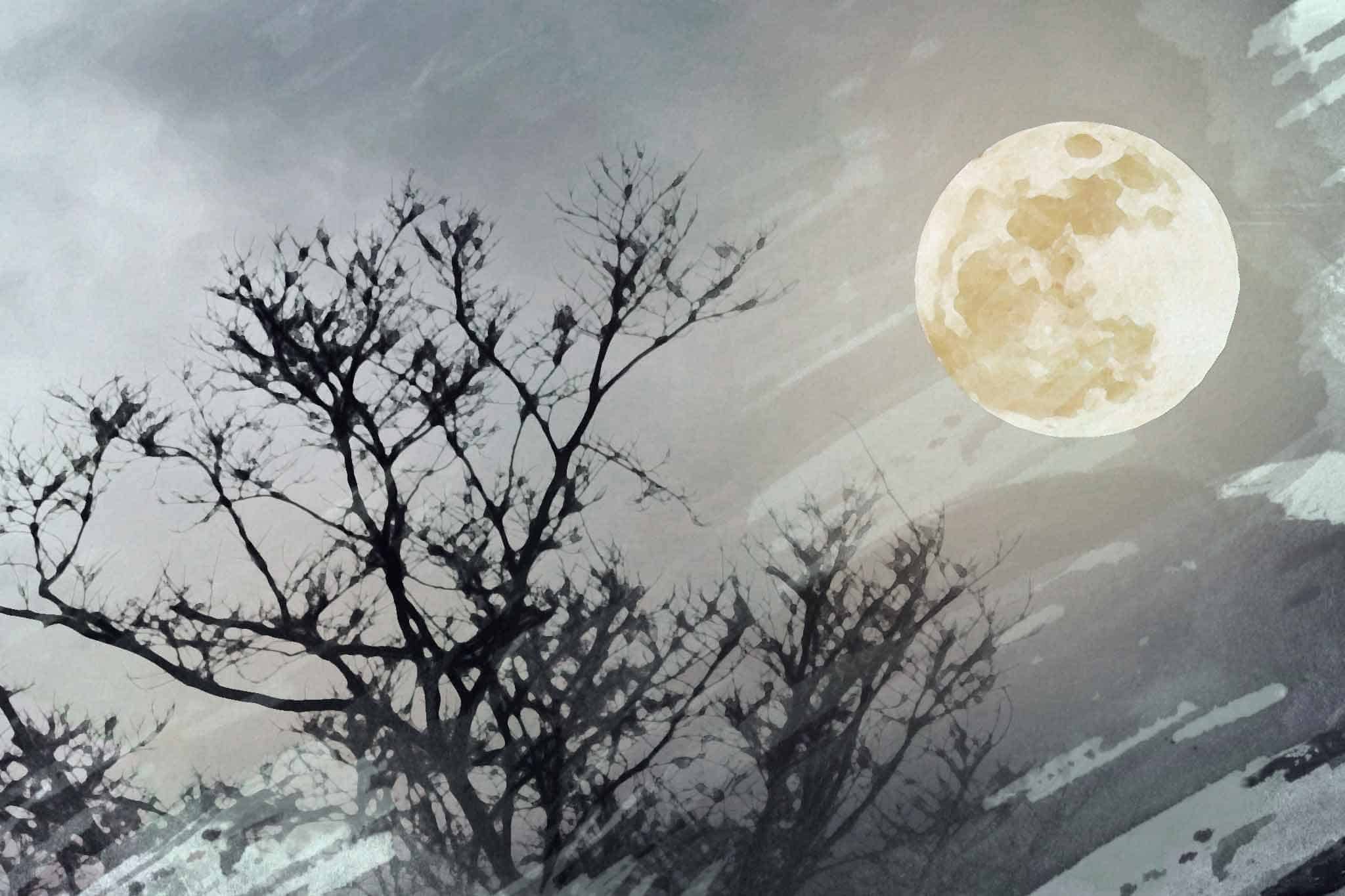 Against a dark gray night executed with loose brushwork, the golden moon shines through elegantly.

The silhouetted watercolor branches creep up and up as if they’ll soon fill the entire painting. 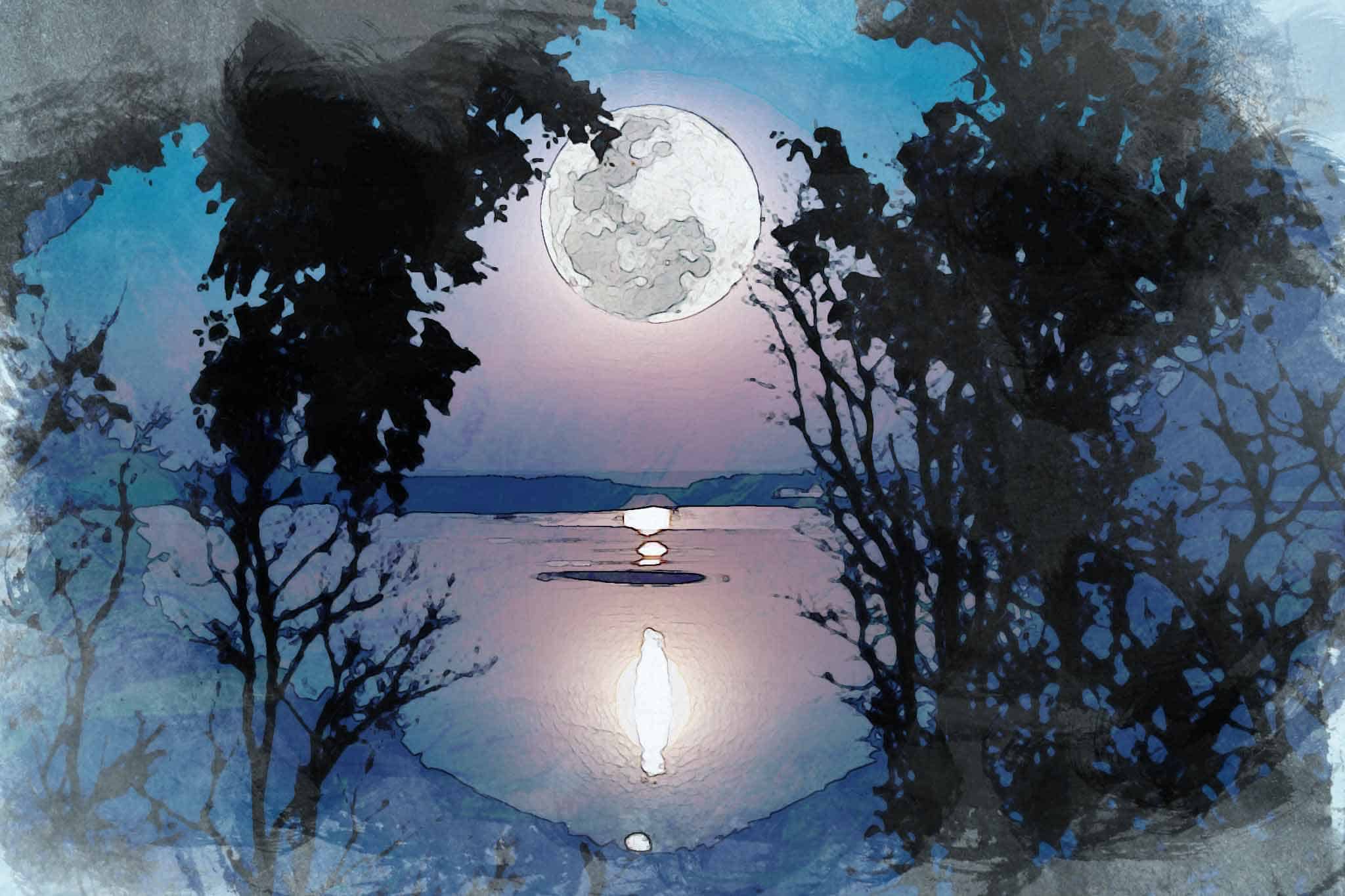 The subject sits in the center of the canvas, making itself the focal point.

The leaves rustle while the moon’s reflection on water serves as a shift in the painting. 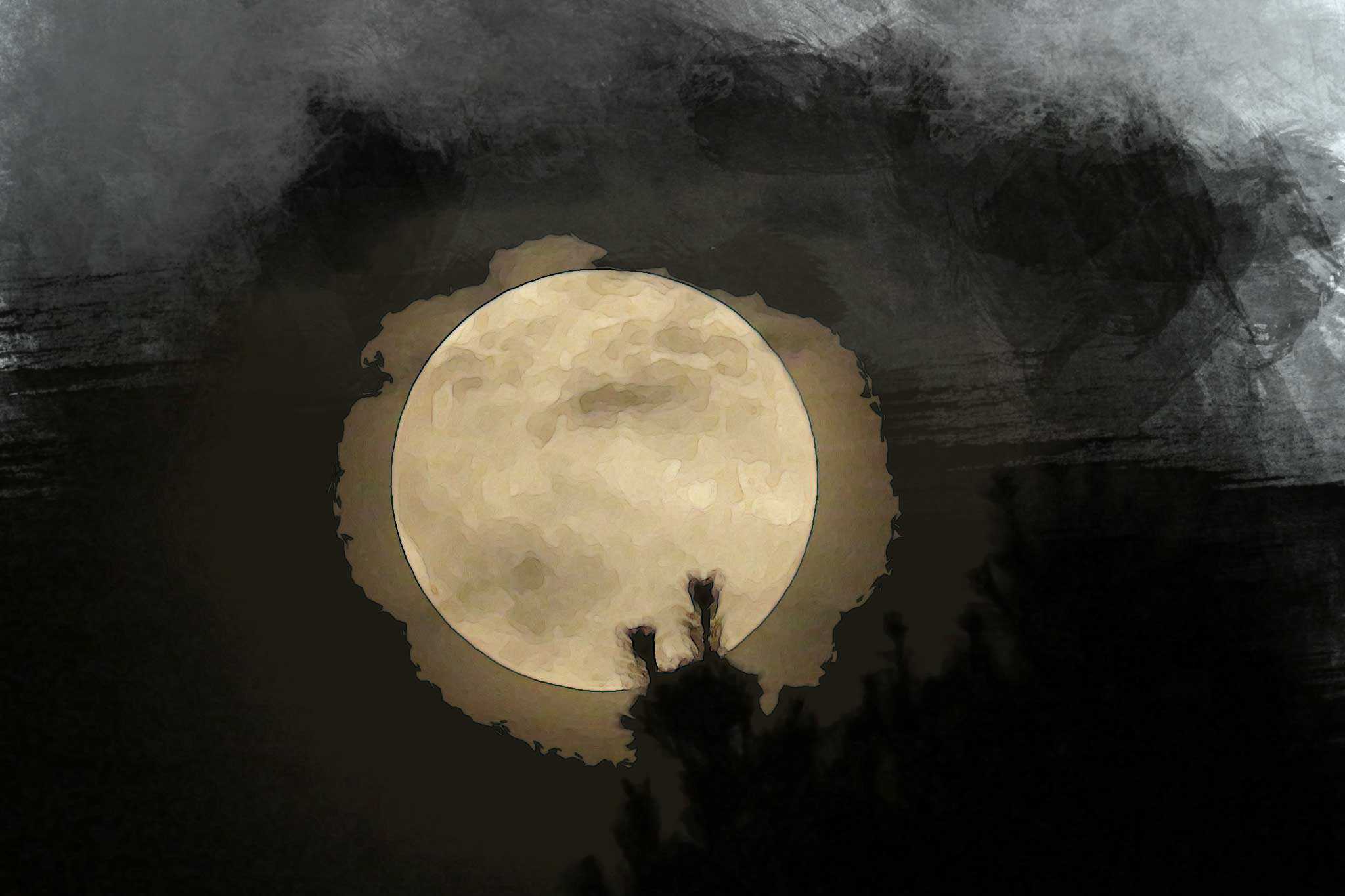 From the darkness of night, a gleaming full moon brightens up our day with its enchanting existence. 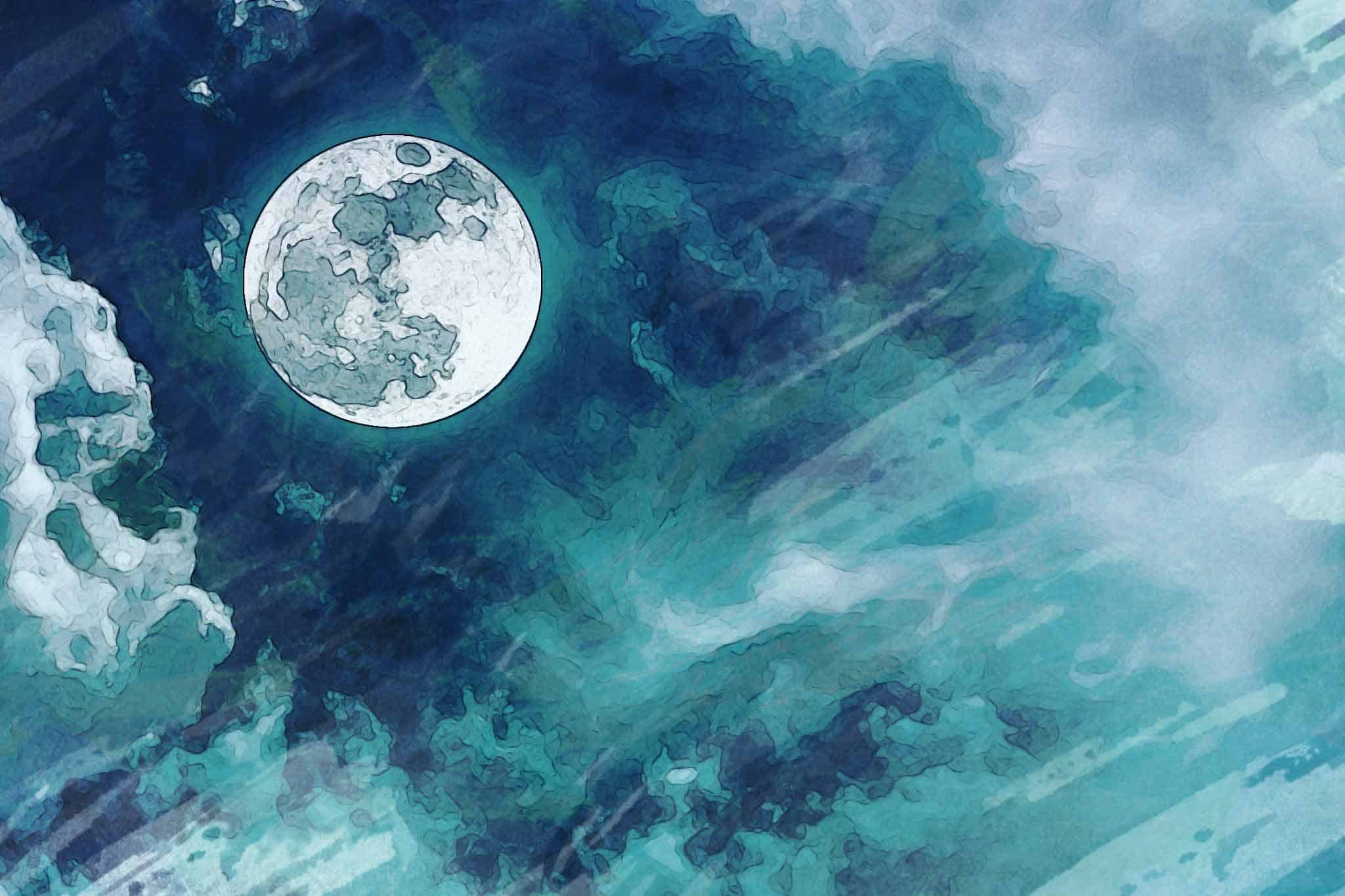 The loose brushstrokes add drama to the painting –  it appears like it’s the night of a storm.

Yet, the choice of colors is refreshing, presenting a relaxed and serene feeling.

A wonderful example of an art piece waiting to be hung in your bedroom for a fresh view. 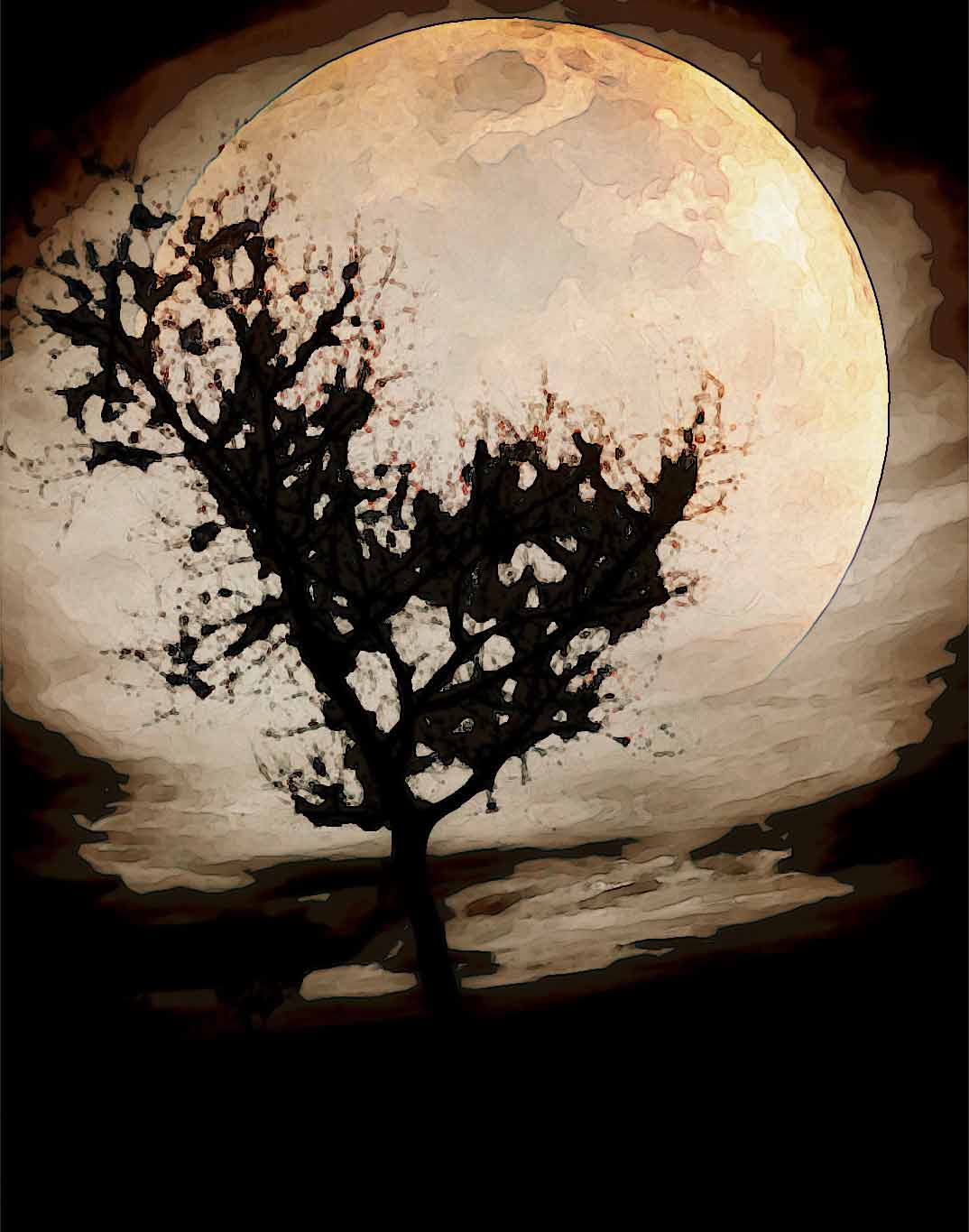 A night of melancholy – the moon looks magnificent from up close.

Its size and luster, bequeath the viewer under a dark spell. 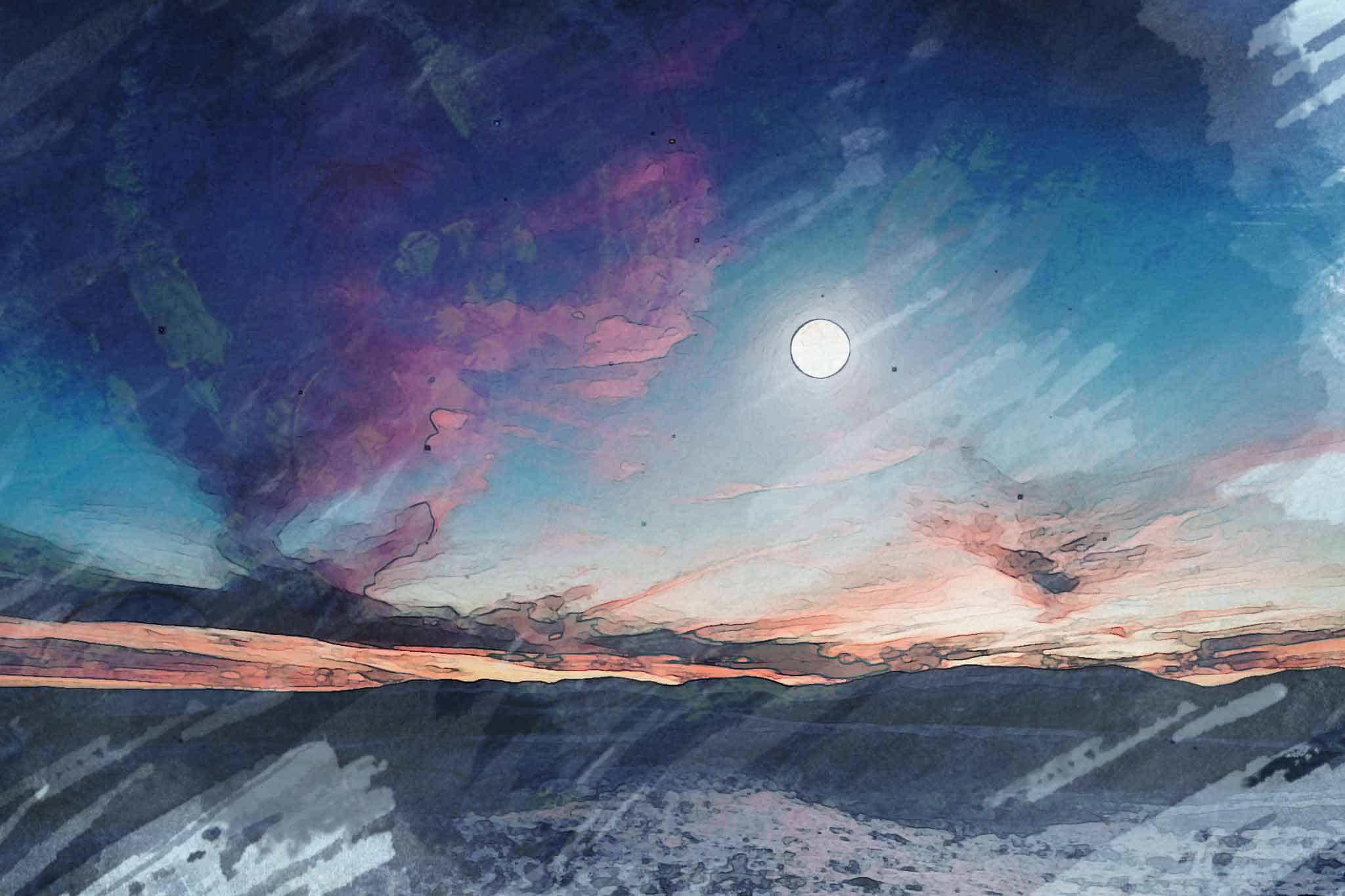 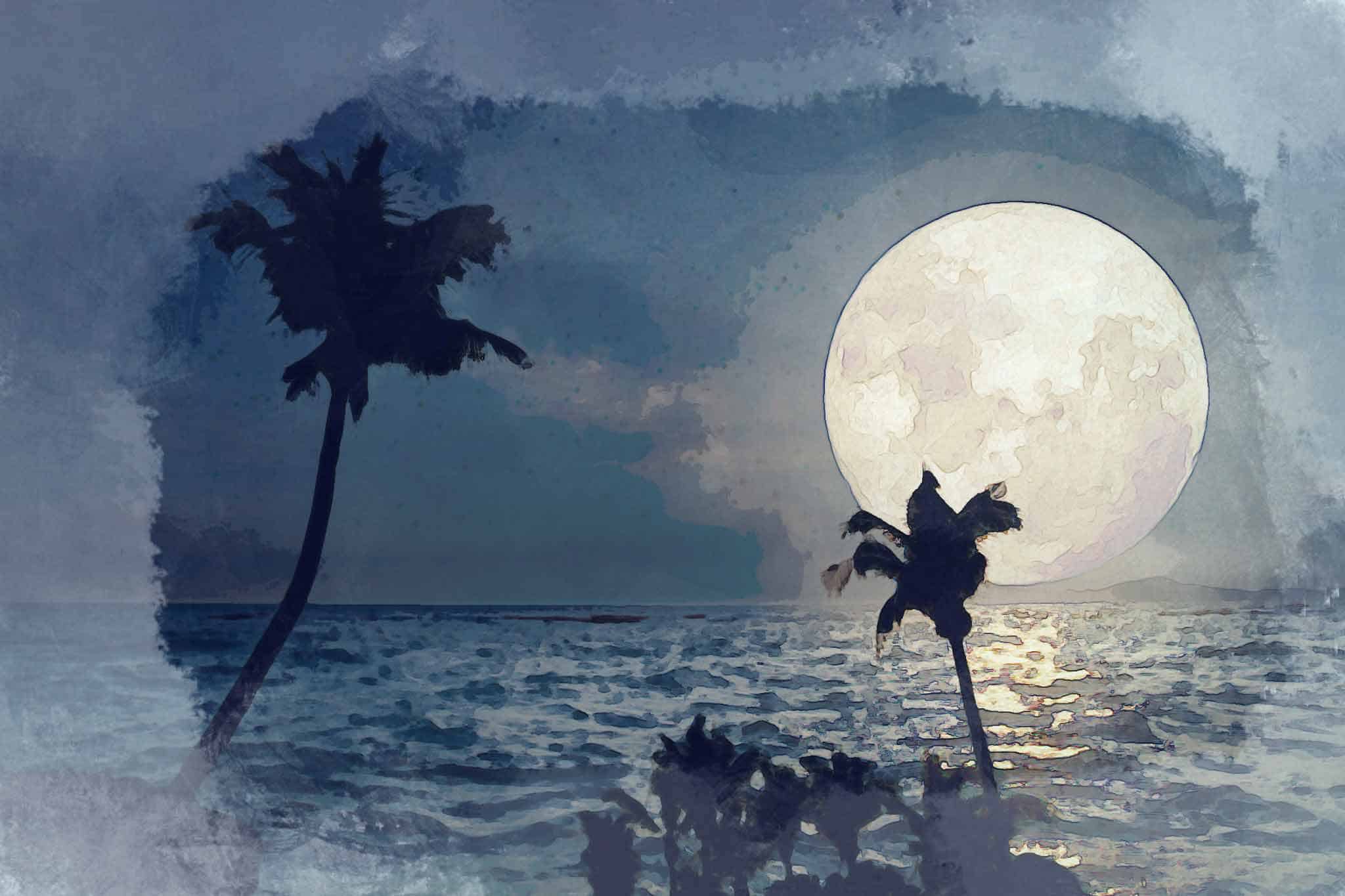 The palm trees sway and the water gushes forth as the moon comes up.

The waves in the sea are highlighted with utter perfection as the moon shines over them. 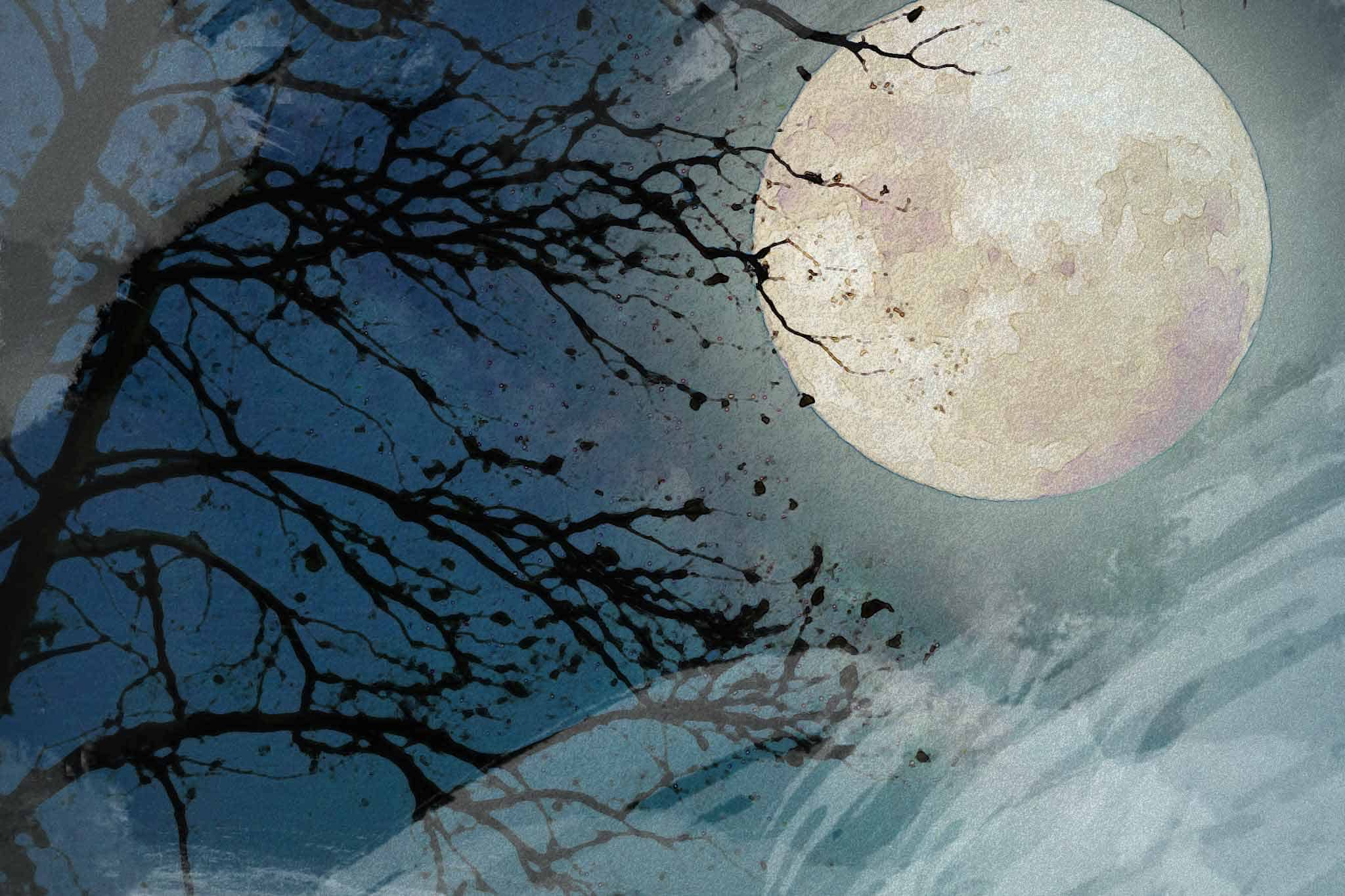 The moon in its humble glory rests in a corner. 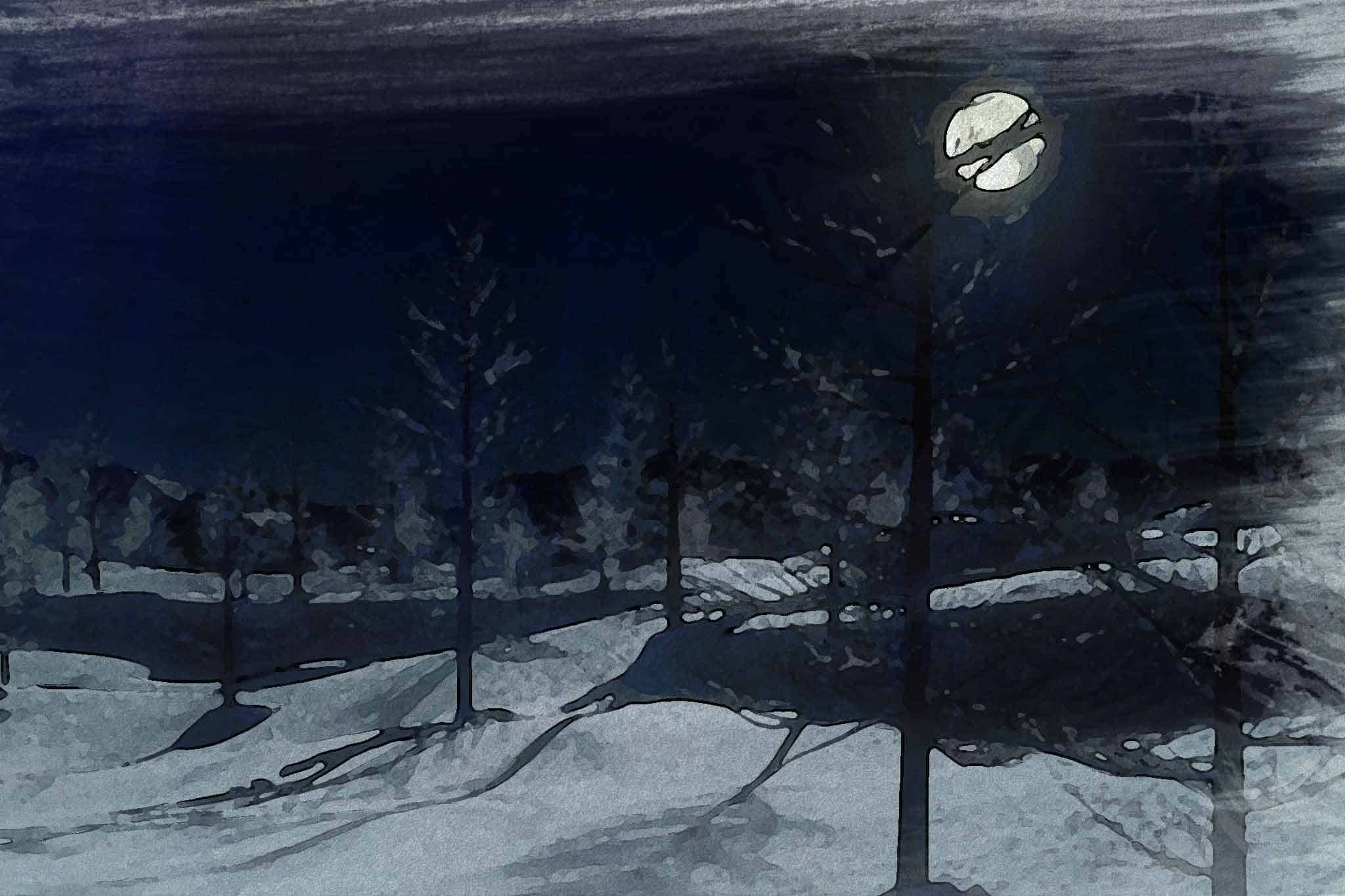 The subject of the painting is minute and hidden, yet it is the focal point.

It spreads its light throughout the canvas clearly manifesting its mystic abilities. 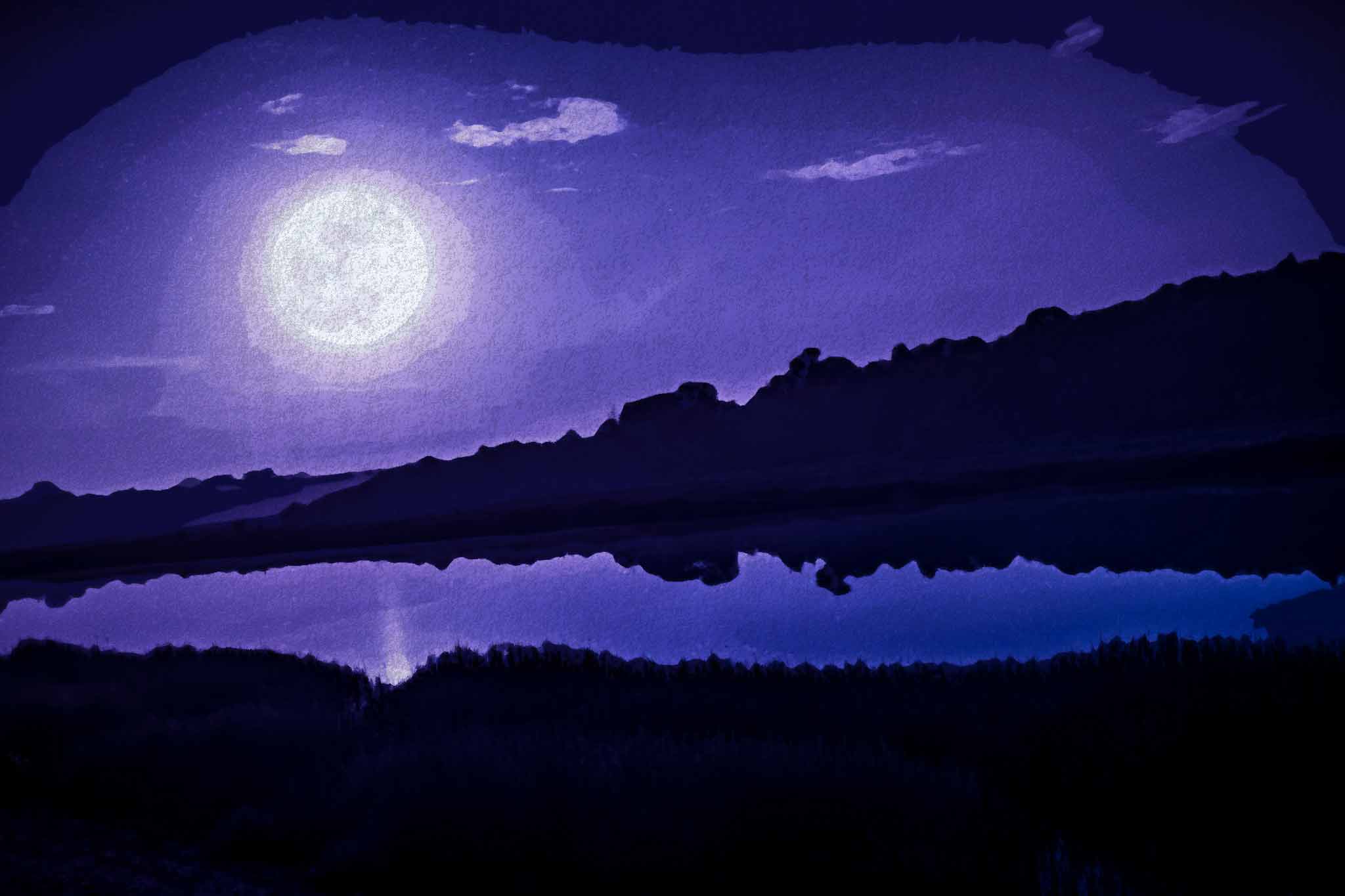 An almost indigo colored romance between the sky and water.

The bright moon flawlessly balances the darkness of the night. 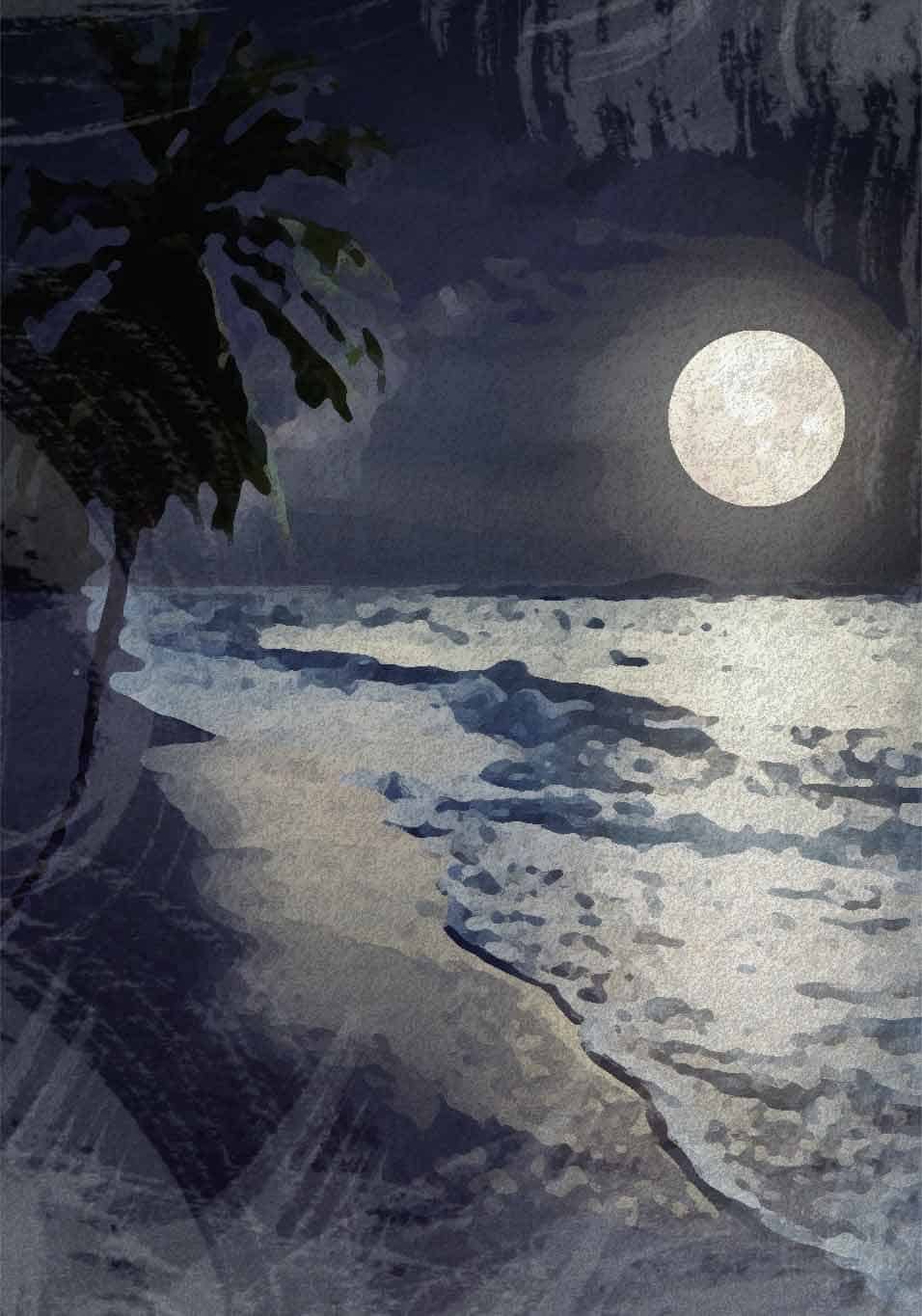 The slivery moon glistens upon the beach, the wind gushes, and the shimmery tides race further onto the sand.

The carefree brushwork joins the edges of the canvas, leaving an exciting effect. 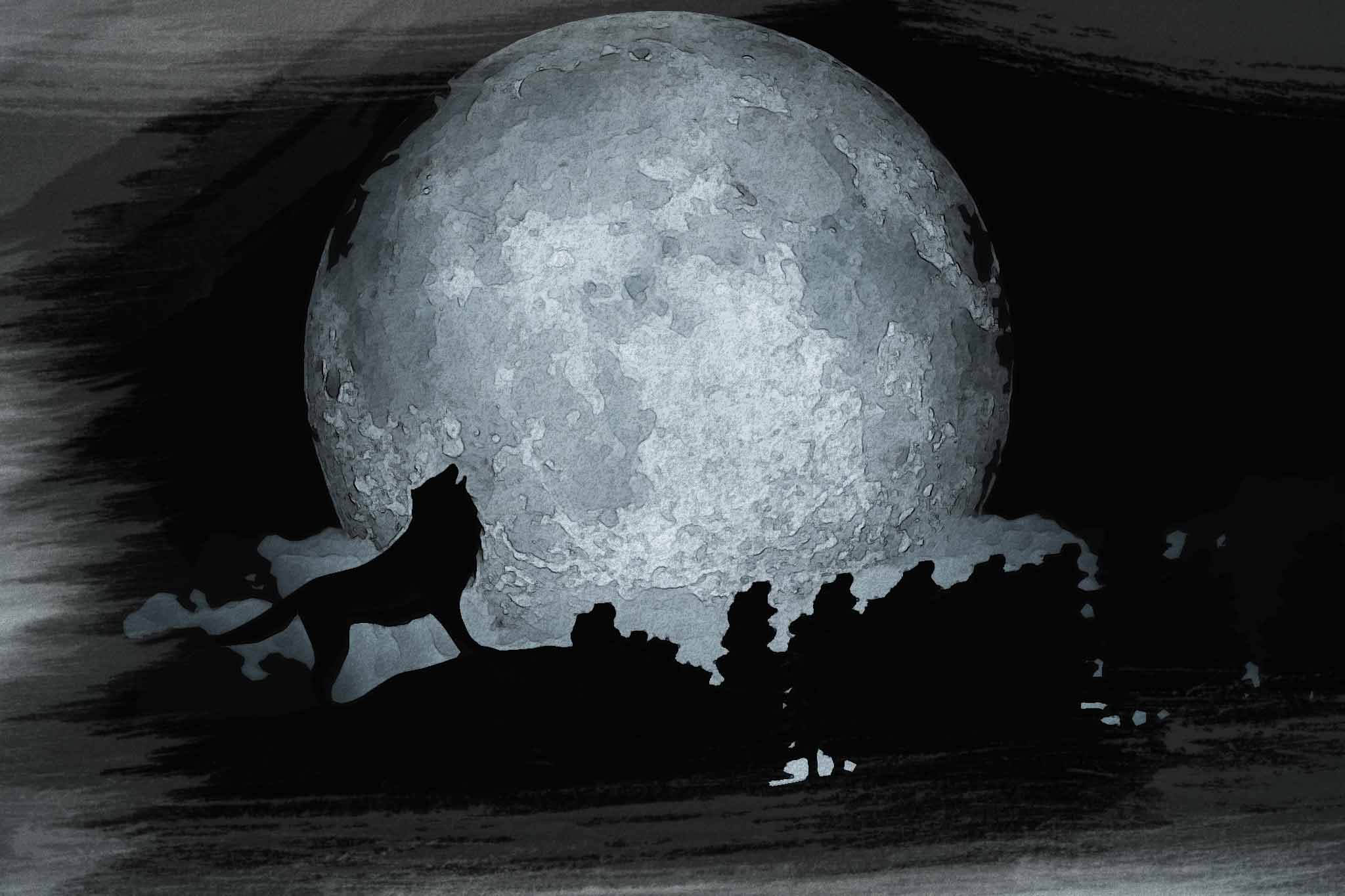 This painting smoothly highlights the details of the moon – its depth and textures making the surface feel raw and tangible.

To add a touch of drama, a silhouette of a wolf howling on top of a hill. 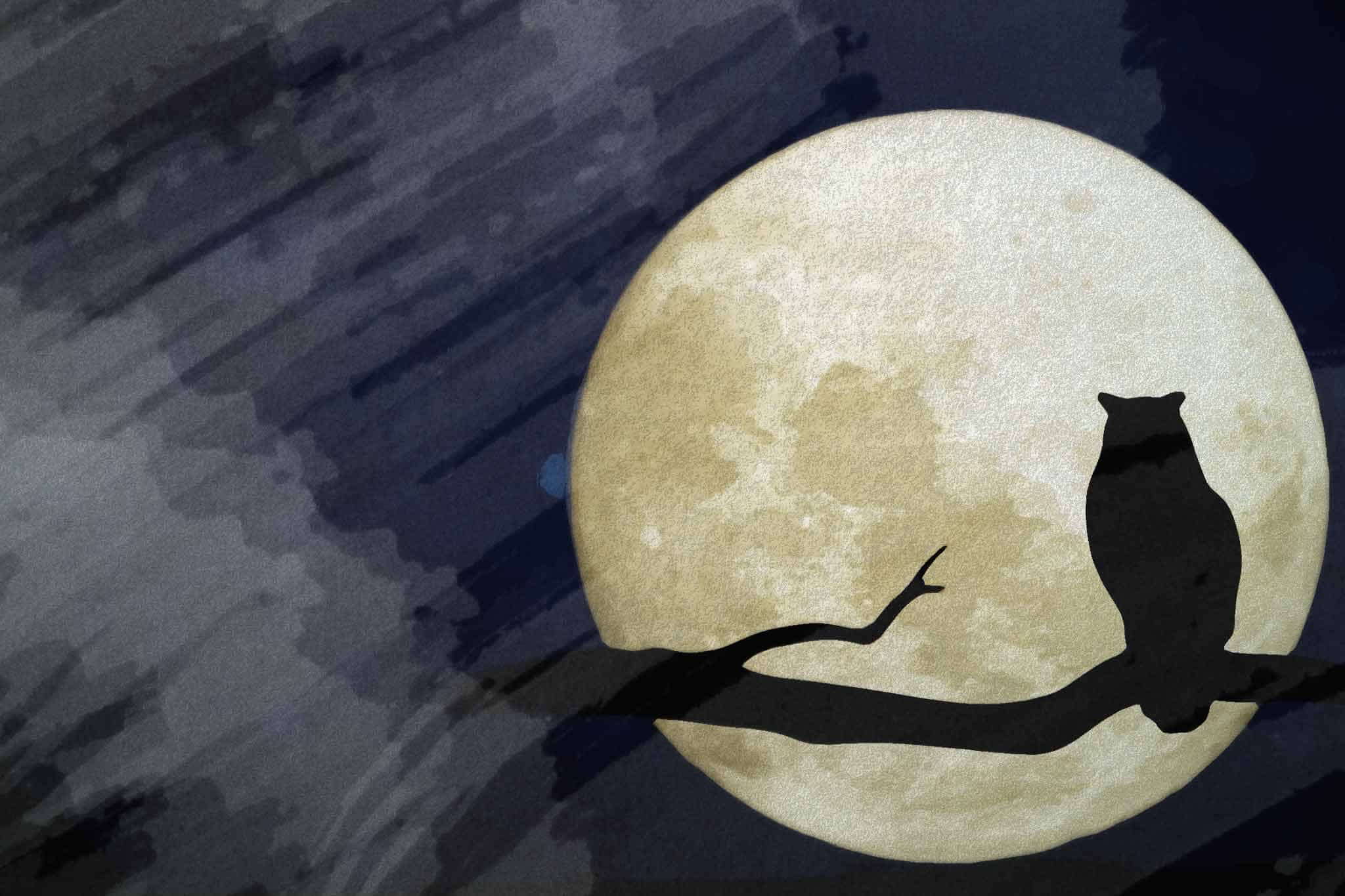 The owl rests on a tree branch gazing at the golden full moon.

In one corner of the canvas, the featured brushwork adds movement to the painting. 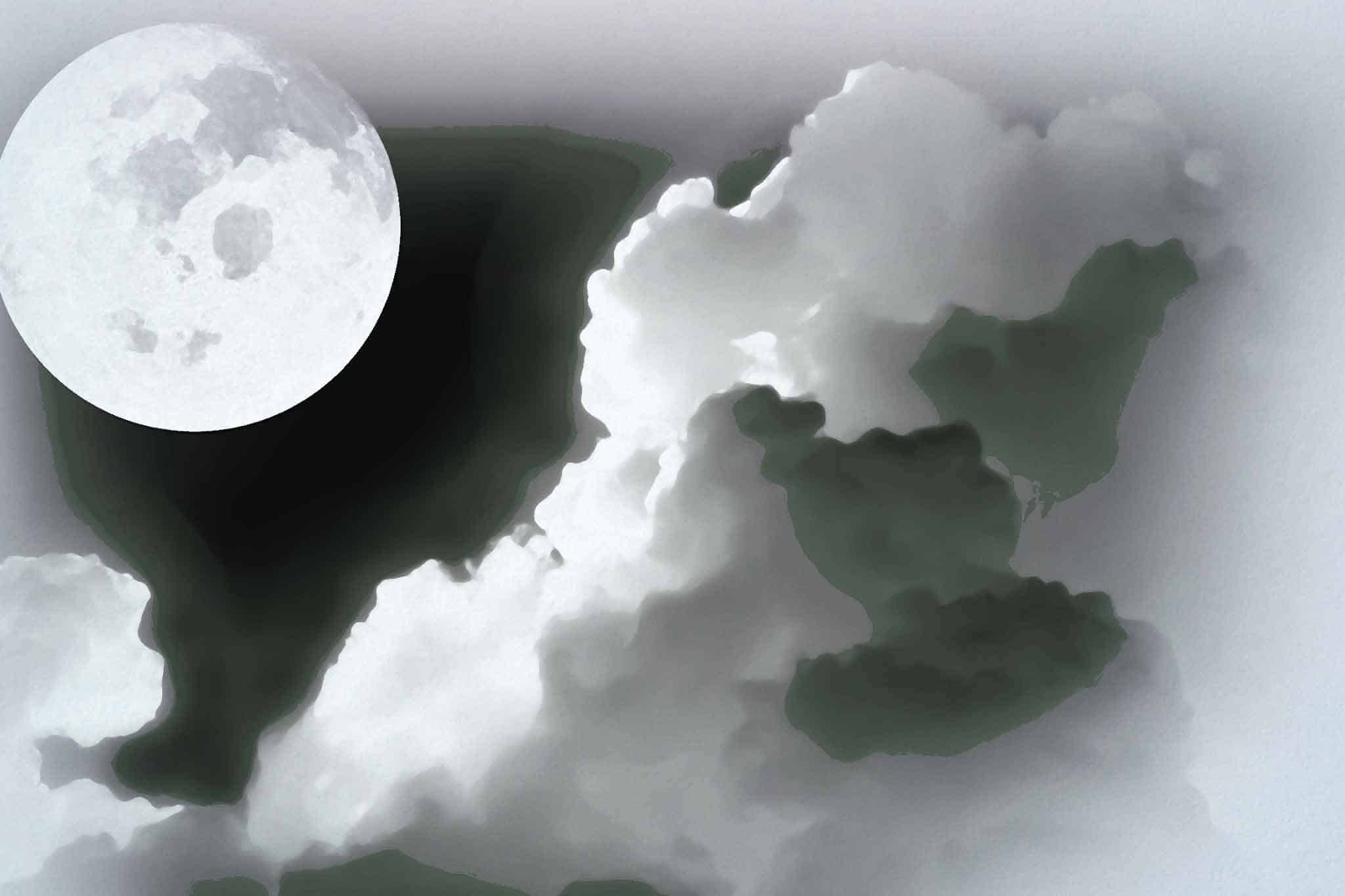 The soft mellowness of the smokey clouds and the gloominess of the moon perfectly paired together in a composition.

This painting is an wondrous example of a bright, yet dark artwork to be placed in the lobby of your home. 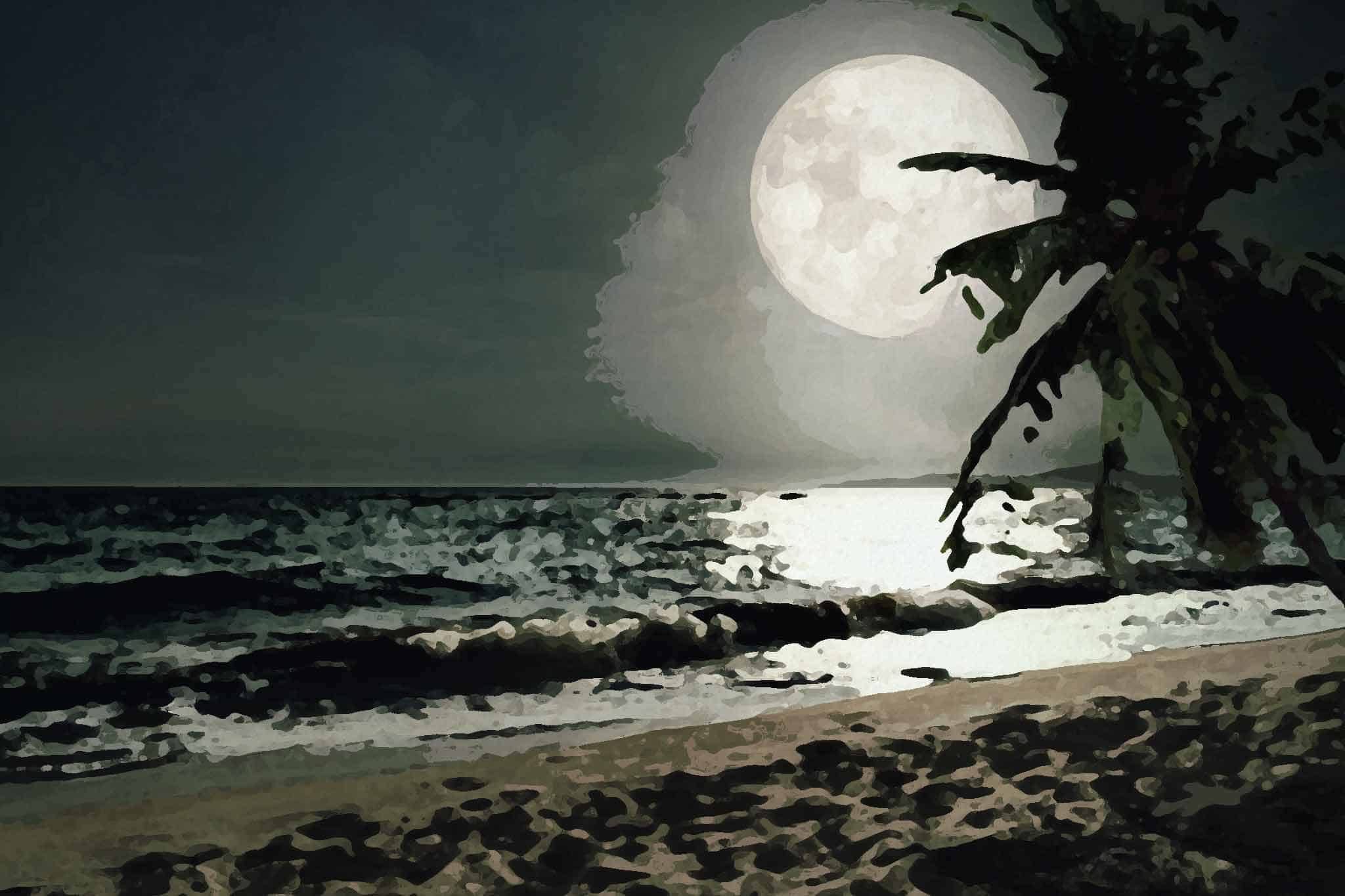 The artistic approach has used a pristine manner to highlight the details of footsteps on the sand and the waves in water.

This theatrical effect makes the painting seem 3D and tangible. 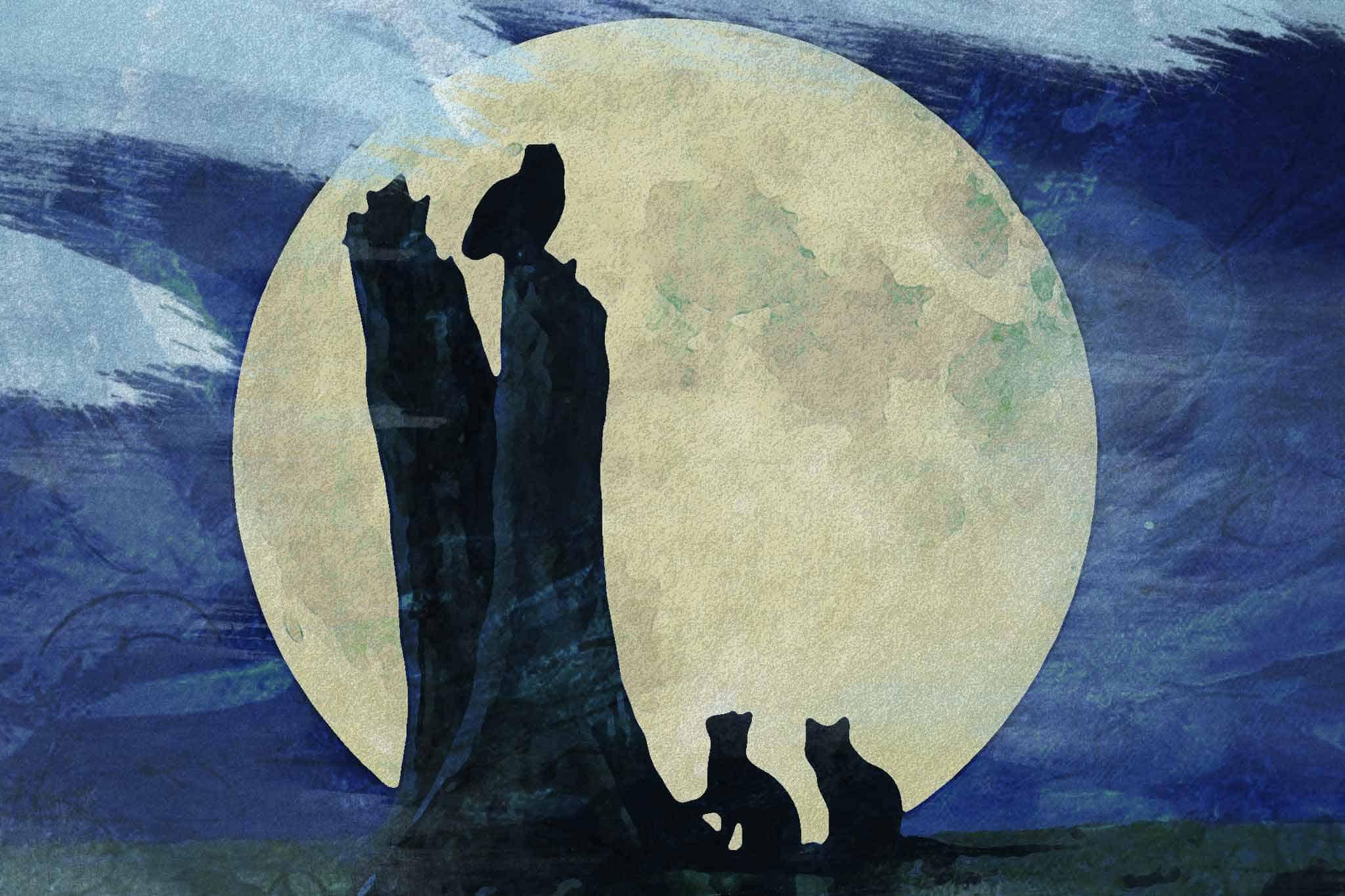 A delightful sight where we see silhouettes of an owl and, two cats against the magnified moon.

This painting carries a story to it, as it t appears like the cat is trying to climb up the tree trunk to catch some wisdom from the wise owl. 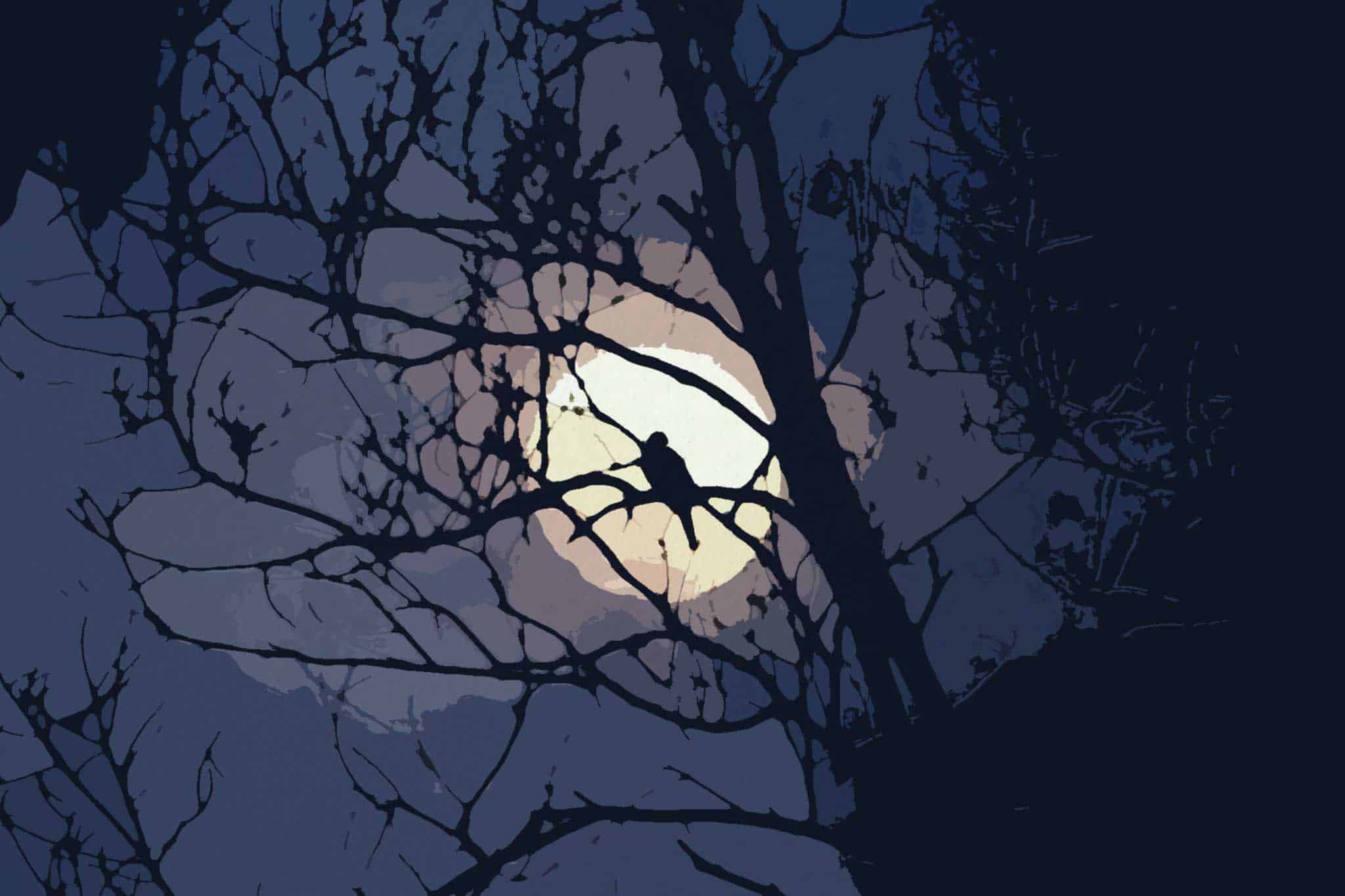 On a quiet night when everyone sleeps, the lustrous moon can be seen hiding behind the web of tree branches. 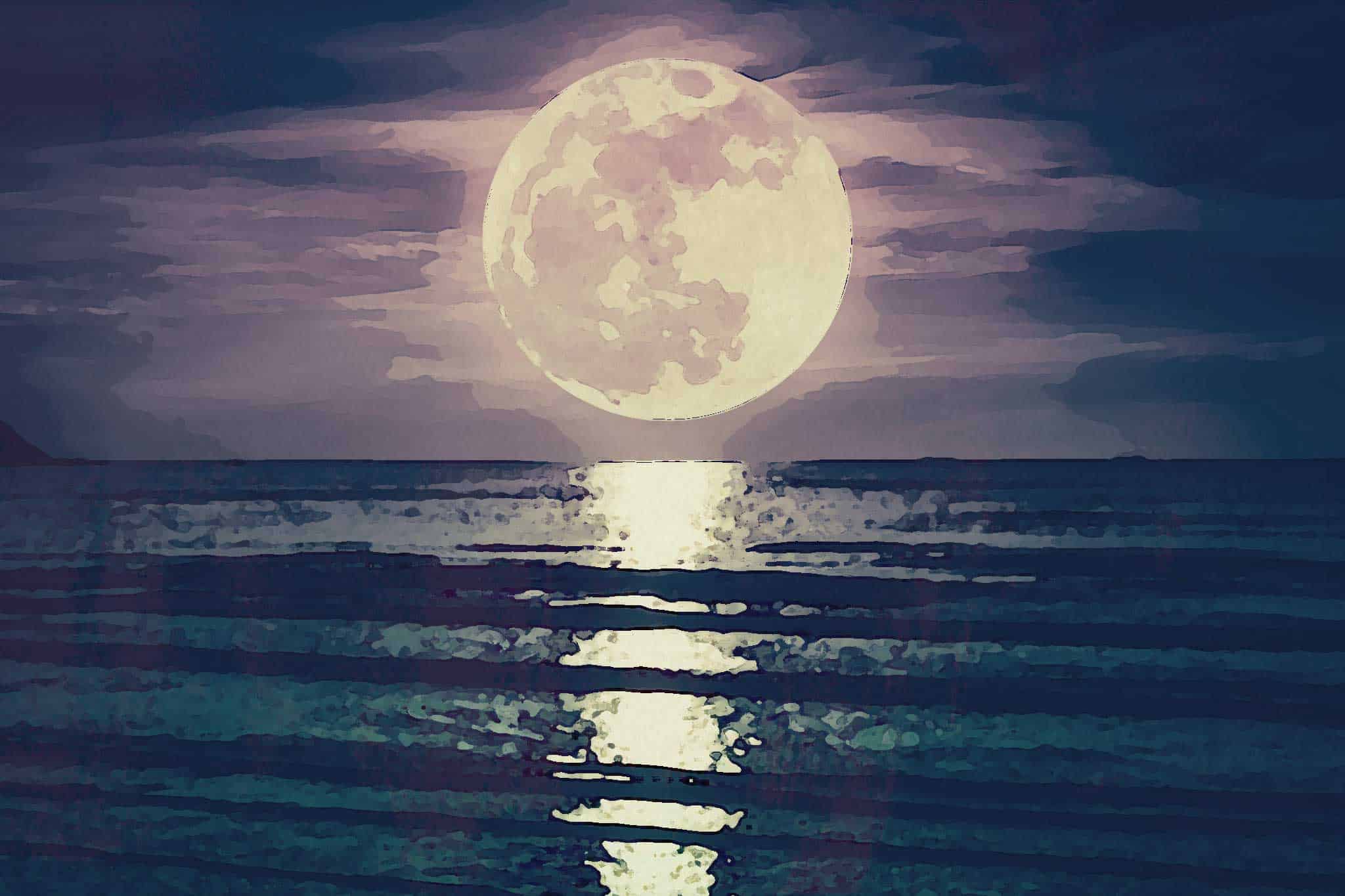 The moon shines over the sea while the water slowly runs its course.

Pay attention to how the water reflects the moonlight providing a tranquil experience for the viewer.

Now that we’ve had a look at some illuminating moons, did you know that the moon has no atmosphere? Yes!

This means that no sounds can be heard on the moon. Plus, just like the Earth, the moon has quakes too!

Something about the moon has always been gloomily romantic. Lovers residing far far away from one another, look at the moon as a sign of hope.

Indeed, a moment of sorrow yet, a promise for a better tomorrow.

The watercolor moon paintings seen above portray both, the bright and dark sides of the moon in a compelling manner.

The luster emerging from the smoky clouds and the moonlit reflections upon water – all featured in an immaculate manner by the sharp artistic approach.