Tamara from Provident Home Design had been crushing on a blue and white striped lamp from Wisteria for quite some time.

She knew the $219 bold and beautiful lamp would look gorgeous on her newly DIYed console table – just not at that price.

Tamara was still able to bring the look to her console by refabbing a vase from Goodwill. I love the metallic gold accent!

But there’s more to the story… 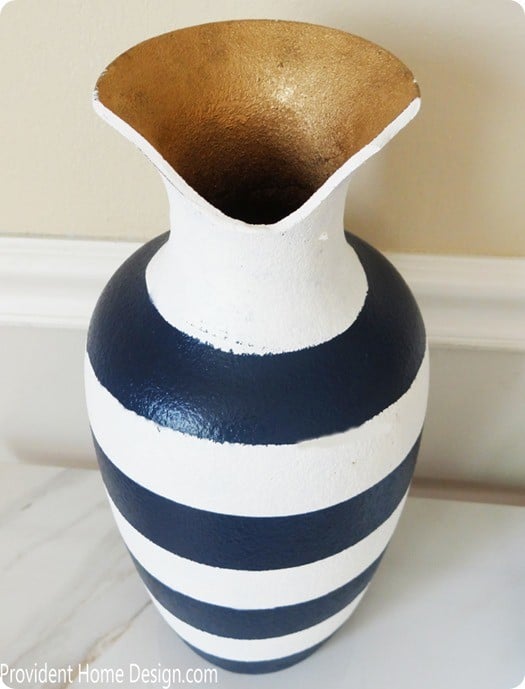 While prepping for her vase make-over, Tamara left the vase alone with her daughter. No biggie…except her daughter was three.

When Tamara returned, her little one informed her she had broken the vase. But this is where this project gets interesting. The vase had indeed broken from some kind of fall. The way it landed however, only one good sized piece was missing from the vase’s lip.

To Tamara’s surprise, her newly altered vase didn’t look terrible, so she went with it. It gave the shape character that didn’t detract from it, but indeed made it all the more interesting. What’s more, is the sparkly gold paint she planned to use inside would now show more prominently and play better off the dark blue and white stripes on the outside of the vase.

As others mentioned, Tamara truly got a lucky break.

But this begs the question. What if you want this look on purpose? How do you get your clay or ceramic vase to look like this intentionally?

Reshaping Your Pot or Vase

Your choices are to either break your vase or cut it. Breaking is a risky business, as it involves either scoring or cracking before applying some kind of blunt force to get the exact shard you want removed. This is fairly unpredictable when it comes to pottery.

That leaves cutting. Thankfully there are a few tools out there that can do the job. Read on to learn more. 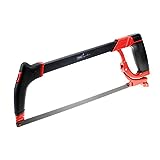 If you’re after the effect that Tamara got purely accidentally, but want to control the look, you’ll need to cut your vase. The best tool for this is called a carbide rod saw.

The carbide gently but effectively grinds through pottery without cracking it. If you have a hack saw, you can simply grab a carbide blade like this one.

A carbide blade cuts using grit (think sandpaper). This works much better than actual teeth like on a traditional kind of saw blade. Nothing to grab or catch to “flake” off smaller pieces as you make your cut.

Another way to cut your tall pot or vase and give it a hip, new shape is to use a power tool.

A tile saw comes to mind, but you need something smaller. And you want a blade action that doesn’t go up and down, say like a jig-saw. The rougher vibration generated could easily cause the vessel or edge of the pot to crack. You’d also have the problem of your cut chipping away instead of getting sliced nicely. 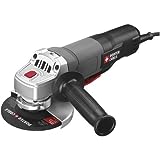 You need a tool that either spins or oscillates at micro frequencies. A Dremel rotary tool can do this, but it could take a while depending on the blade and RPMs of the model.

What’s better is an angle grinder or cut off tool such as the one pictured at the right. With a masonry rated wheel, you’ll get the same abrasive and grinding action as the carbide rod saw. A diamond wheel would do the job as well, but those can cost a little more.

Just be careful when cutting since the machine may go faster than you want it to. You want to maintain as much control as you can to follow your desired cut line.

Tips for Making the Cut

Check out the video below of how an angle grinder can easily cut and shape terra cotta or clay materials. In this video, the person is cutting out a circle. But the same effect works if you want to cut from the top of the lip down.

For Tamara’s project, she was inspired by the Blue Peter Lamp from Wisteria.

From there, she used a second-hand vase and painted on the same effects with the stripes and gold. A bit of serendipity revealed that reshaping the vase would give it a unique look that would make it all the more attractive as it let the interior gold color show more.

Check your thrift stores or hobby shops. Target carries some terra cotta vases that could be reshaped and transformed as well.

Fortunately, we’ve covered a simple way you can cut pottery to get this same look. Who knew a knock off could be inspired by another knock off? That’s good stuff. Now, you just have to decide which shape you want and get to work.

To see more details about Tamara’s project check out her transformed vase at Provident Home Design. 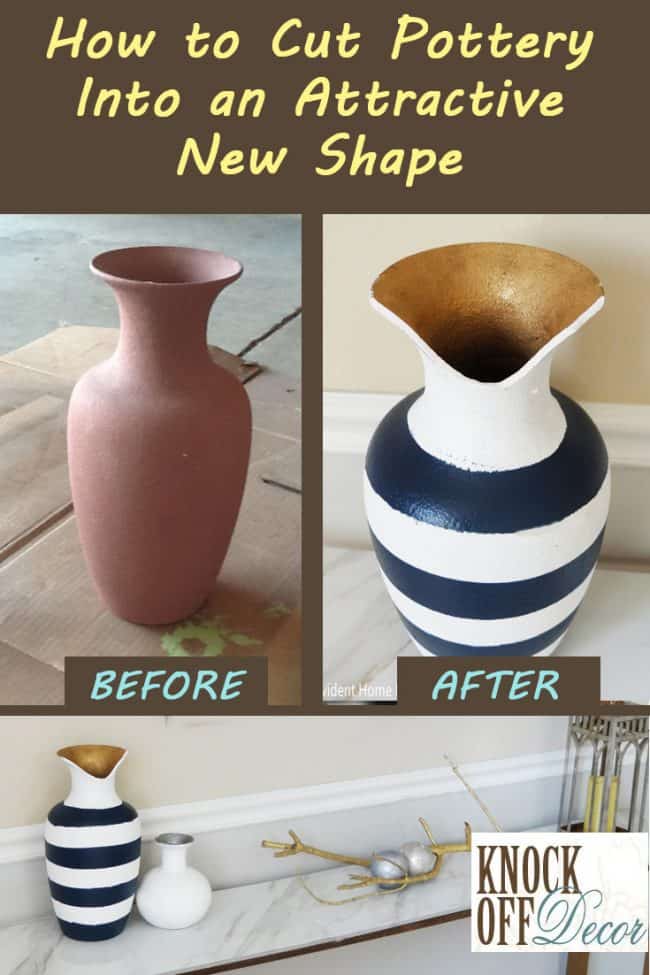 Thank you for the feature, Beckie!!

You are welcome, Tamara! Happy Fourth!