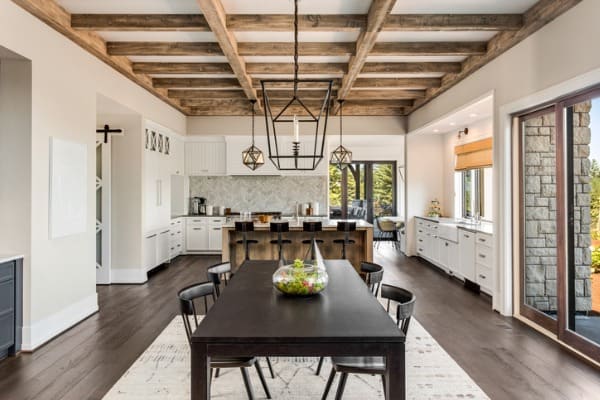 The US is a melting pot of cultures and people, a diversity that is reflected in the designs and styles of homes across the nation.

Spanish styled homes with open spaces are predominant in the West Coast region, while the East is dotted with formal and erudite structures, and the Midwest with traditional and comfortable homes.

However, today’s regional designs cut across different influences and variations. The climate, environment and migration of styles account for the variety of home designs in each state.

Climate and the Environment

Climates vary across states in America.

For example, California enjoys a nearly Mediterranean climate, making it susceptible to home designs that mimic the lifestyles of countries around southern Europe.

You will see lots of courtyards and outdoor living rooms that are integrated in the overall floor plan. Driven primarily by high land prices, builders use their creativity to make the most use of indoor and outdoor spaces.

Along with Florida, Rhode Island and South Carolina, they favor coastal design because a huge part of their territories share a border with the Atlantic.

A coastal style uses natural light and soft tones, making it feel like it’s summer every day inside the house.

On the other hand, colder states such as Michigan, Montana, Pennsylvania and New Hampshire move towards an industrial type of home design, which is essentially a modernized version of the farmhouse common in Georgia, Louisiana and Wyoming.

The industrial style has a modern feel focusing on metal and wood.

Influences from Other States

Take the example of Midwest dwellings that have traditional floor plans.

To illustrate, the dining and living rooms were always toward the front of the house, but in the last five years, home design has shifted to multi-purpose spaces instead of formal rooms or areas.

The Northeast is also influenced by ideas from the other parts of the country, and today, there are more homes with open plans.

Likewise, builders in the East tend to construct single-family homes and townhouses that feature master bedrooms on the ground floor due to an older market.

Even if the houses are not going to be occupied by seniors, a bedroom on the first floor can serve as a guestroom for elderly people and visitors.

Home designs differ from one region to another. Climatic and environment factors, as well as the migration of design ideas, may not make homes unique along state lines, but they do make them fun and exciting because of the diversity in styles.